The Gift
By: Bill Gibron

Where's our present?
Buy It From Amazon
Buy It On DVD
Buy It On Blu-Ray

The past comes back to haunt the characters in Joel Edgerton’s effective thriller The Gift, a riff on the stalker psycho slow burn examples of the genre which populated pay cable and the direct-to-video market during the ’80s and ’90s. It’s not about jump scares and false starts. Instead, as a first time filmmaker, Edgerton channels past masters who understood the value of setting the proper mood and allowing events to play out organically, the suspense building from the bottom up, not forced out of familiar situations or tweaked via a groan-inducing gimmicks (found footage, etc.)

When white collar tech salesman Simon (a decent Jason Bateman) returns to his hometown of LA with his decorator wife Robyn (Rebecca Hall), it appears that things are looking up for the couple. They’ve just purchased a wonderful new home, and he seems prepped for a promotion. Into their life wanders an old high school classmate of Simon’s, Gordon (Edgerton, very good as the ambiguous bad guy) who has a vendetta against the man. You see, back in the day, “Gordo the weirdo” was picked on mercilessly, and more and more it looks like our hero was actually a villain, orchestrating the worst of the abuse.

Revenge becomes the next step, as Gordon wants Simon to pay for what he did. Beginning by endearing himself to the couple, and then slowly wearing away their resolve, it becomes clear that Simon is no saint and his former childhood target is ready to go to some amazing extremes for the closure he needs. As the facts are slowly revealed, as the marrieds fight and Gordon goes gonzo, we start to take sides and look for justice. Instead, Edgerton pushes our sympathy buttons, moving us back and forth between the characters, setting up a dynamic that drives the story toward a shocking and unexpected end.

Granted, The Gift is really nothing new. Anyone old enough to remember Michael Keaton, Matthew Modine, and Melanie Griffith in John Schlesinger’s yuppie horror effort Pacific Heights will catch a similar vibe in what Edgerton is after. Playing down his otherwise leading man looks and playing up Bateman’s baby-faced passive aggressiveness, he twists the truisms within the genre, constantly keeping us off guard while making sure we never miss the machinery that helps deliver the edge of the seat dread. This is nail-biter in name, an attempt to take the audience to places both formulaic and fresh.

The cast is excellent across the board. Granted, the drama hinges on what happened years before, but everyone here understands how to channel their inner turmoil to make the present problems all the more real. Bateman and Edgerton’s cat and mouse is particularly effective, both actors allowing hints of what happened then to taint their personalities now. This is especially true of the former, whose funnyman status clouds a complex performer and performance. When he’s mocking Gordon, we think he’s joking. When we see the hurt and fierce anger in Edgerton’s eyes, we know there’s no humor in it at all.

As a director, Edgerton also finds unique ways to reinvent the givens. A koi pond becomes the Fatal Attraction bunny, a series of more and more outrageous gifts the phone calls from an I Know What You Did dynamic. By worming his way into their life, Gordon wants the couple to see things from his perspective, to understand that bullying can leave wounds that never truly heal. That Simon might want them to stay open — and perhaps, turn deadly — is where the patient viewer will earn their reward.

The Gift may not be a true revelation, but it is an effective and workmanlike thriller. It doesn’t drop the ball so much as pick it up, dust it off, and throw it right back in your face. 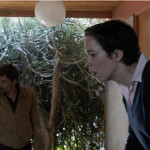 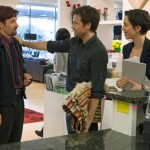 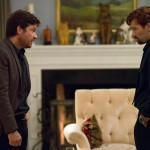