The Future of Cinema Is Digital, Whether Filmmakers Like It or Not movie review » Film Racket Movie Reviews

The Future of Cinema Is Digital, Whether Filmmakers Like It or Not
By: Matthew O'Connell

People used to watch movies this way. It's not even inside a furniture store.

Digital video is displacing 35mm film as the primary means of producing, distributing, and exhibiting movies. Digital cameras are smaller, cheaper, and easier to operate. So are digital prints and projectors. In North America, 85% of cinema screens are now digital. Economically, it’s tough to deny that digital is the preferable medium for movies.

Still, some filmmakers rail against digital cinema. These tend to be established filmmakers who need not be concerned over whether or not their films will a) get funded or b) reach an audience. Quentin Tarantino is one of them, calling the shift towards digital production and projection “the death of cinema.” According to him, “the fact that most films now are not presented in 35 millimeter means that the war is lost.”

Christopher Nolan and his cinematographer/soulmate Wally Pfister are also among the most famous and vocal holdouts. Nolan recently defended his pro-film position in an op-ed published in the Wall Street Journal. In Nolan’s case, it’s a deep, emotional love and respect for cinema that has him sticking to his 35mm guns. 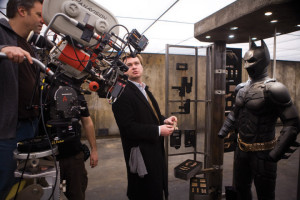 Christopher Nolan on the set of Willy Wonka and the Chocolate Factory, or something.

Nolan says he doesn’t want movies reduced to fleeting, small, cheap, temporary experiences. He wants them to be significant, physical, undeniable events. He wants them to carry more weight. Literally. To Nolan, films are not “content” which can be called up, consumed, and discarded like YouTube videos. Films are shared experiences that occupy physical and temporal space, and deserve our full attention. Nolan says:

“As streams of data, movies would be thrown in with other endeavors under the reductive term ‘content,’ jargon that pretends to elevate the creative, but actually trivializes differences of form that have been important to creators and audiences alike.”

Most digital media is fleeting. It caters to an environment where depth is displaced for virality; long-term significance for short-term sizzle. And by its nature, it’s a collection of phantom bytes, flashing briefly before us until we click them back into the void. As we adopt a medium where movies can be shut off or swapped out after a few screenings or even a few minutes, we’re accommodating shorter attention spans and fickle audiences instead of the art and originality that has made cinema the most important art form of the last century.

Few will argue that seeing the Sistine Chapel on your iPhone is the same as seeing it in the flesh. But still, many feel that watching Raging Bull on a tablet is an acceptable substitute for going to the theater and feeling 35mm film flap through a projector and light up the whole room. They’re wrong. 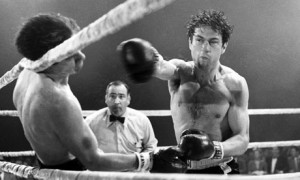 Your iPad cannot contain this much awesome.

We maintain grand physical monuments all over the world to host and share art, but insist on distributing films in smaller, easier-to-consume ways. Should we share and view movies digitally just because we can? When we remove the presence of film, we chip away at the gravitas and urgency of the movie. We strip away a layer of emotional interaction. This shift is resulting in a greater emphasis on sensationalism in movies. They need to be bigger and more explosive to capture the public’s attention.

Along the way we’ve seen a smaller quantity of bigger-budget blockbusters produced by studios, each containing a greater quantity of computer-generated characters, more special effects, and faster edits, many granted 3D or IMAX presentation or some other approach (that have little or nothing to do with good cinema) to get people to sit down and stay put. And as far as these efforts make the moviegoing experience more intense and immersive, they are actually effective. Ironically, some digital experiences are more immersive than a 35mm presentation could ever be, despite their lack of physical presence. The tactile permanence that Nolan references may be slipping through our fingers, but in its place we are witnessing the adolescence of a new technology that may completely surpass the capabilities of film.

Technology Is Not the Enemy. It’s the Future.

As audiences, filmmakers, studios, and theater owners embrace digital video, they also accommodate innovation, and that’s not a bad thing, right? Digital production and post-production helps artists achieve their vision in myriad ways that were heretofore unattainable, from enabling tight handheld shots to longer takes to incredible color timing and digital effects. Digital distribution and exhibition allows small towns and distant nations that couldn’t get access to 35mm film prints to now see almost any movie. Likewise, filmmakers who couldn’t afford to have their films printed can now get their work seen around the world.

Nolan, despite his staunch advocacy of the physical medium of film, recognizes the expanded potential that comes with digital technology — in both production and exhibition. He also acknowledges that it’s the movies themselves, and the artists making them, that will determine the future significance of cinema much more than the medium it is presented through. Hopefully, the influence of filmmakers will extend into the actual presentation of their work more than ever before, creating a completely authentic and identical experience for every viewer. Nolan sees an exciting future for film exhibition, saying, “the theaters of the future will be bigger and more beautiful than ever before. They will employ expensive presentation formats that cannot be accessed or reproduced.”

That’s exactly what we need. A presentation of film that demonstrates our respect for it, like the beautiful art deco movie houses that linger from a bygone era. Cinema is a distinct experience, and its presence and importance and legacy must remain intact as we transition it to a new medium. If we can no longer have the same relationship with film that we’ve had for the past century, we can replace it with something worthy; something that bestows it with an urgent and immersive presence. It may never have the same sensuality of film, because it won’ t interact with our senses in quite the same way. But it could be better. And it will definitely be accessible to more people and shared on a larger scale. Isn’t that the goal of an artist? Isn’t that the point of cinema?