The Equalizer
By: Bill Gibron

Anger management? What's that?
Buy It From Amazon
Buy It On DVD
Buy It On Blu-Ray

Fans of that horror movie standby, the slasher film, will easily testify that nothing is as satisfying as watching potential victim fodder — especially those examples of over the top teen idiocy — get their slice-and-dice comeuppance. In fact, the inventive manner in which the killer (be he a Myers or a Voorhees) works out his scary movie statistics becomes the entire subgenre’s raison d’etre. So it is not a criticism to call the latest collaboration between Denzel Washington and Antoine Fuqua a bit like your basic body count extravaganza. The Equalizer may have more a more high-minded meaning behind its main character’s motives, but when it comes to slaughter, it’s splatter-ific.

Washington plays Robert McCall, a mild mannered manager of a Home Depot-like DIY warehouse store. He enjoys reading, helping out his eager employees, and late nights at a local Boston diner. Among the regulars at this 24-hour eating establishment is an underage prostitute named Teri (Chloe Grace Moretz). Amidst their small talk, he learns that she wants to be a singer, and that she’s connected to the Russian mob. When she attacks a piggish John, her horrid pimp Slavi (David Meunier) beats her nearly to death.

Robert decides she needs to be protected, so he offers to buy her from the gang. When they laugh at him, he murders them all. This makes boss Vladimir Pushkin (Vladimir Kulich) more than a little upset. He sends his “cleaner,” a man named Teddy (Marton Csokas), to find out what happened. Before long, he’s made McCall. What he doesn’t know, however, is that our hero is ex-agency Black Ops, with friends (Melissa Leo, Bill Pullman) helping him stay one step ahead of the game.

If you ignore the gore for just a moment and focus on the narrative, The Equalizer is a lot like its TV source, the Edward Woodward vehicle of the same name from the late ’80s. It features an aging man, with a secret set of skills, who helps people who are being unjustly targeted by the lower fringes of society. In between battles with the Russians, McCall helps a young Hispanic employee (Johnny Skourtis) whose mother is being shaken down by bad cops. He also helps a cashier who loses her grandmother’s ring in a robbery, as well as protecting those who can’t protect themselves. He’s very much like the character from the series, except for his race and his undeniable ability to turn a typical late night crime into a body-strewn bloodbath.

This is a movie with pruning saws to (and through) the neck, nail guns to the torso, and drills to the back of the head. No matter if he’s putting a shot glass through a thug’s eye socket or picking off targets with marksman-like efficiency, McCall is a certifiable bad-ass, dealing death with ruthless disregard for anything other than vengeance. There are even sequences where Fuqua doesn’t bother to show us the carnage, just the collection of corpses strewn across the locale. This is a perfect role for Washington, an origin story upon which a solid and very successful franchise can be built. Fans may balk at the level of brutality here, but it’s the very sadism on display that makes The Equalizer so effective.

This is really an one man show, with no one except Csokas up to our star’s command of the screen. His Teddy is terrific, a thug who fancies himself a dandy, his tailored suit and dapper manner hiding a horrific disregard for human life. Though he doesn’t have many scenes with Washington, the ones they do have together crackle with potential energy. Elsewhere, co-stars like Mortez, Leo, and Pullman merely exist to give Washington a chance to work out some expositional needs. Teri may be the reason McCall “comes out of retirement,” but she disappears from the story after about half an hour and doesn’t return until the end, almost 90 minutes later.

Still, for lovers of all things violent and vengeful, The Equalizer is a treat. It’s a sick, demented splash of arterial spray, but it’s a damn good example of vein draining. 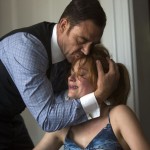 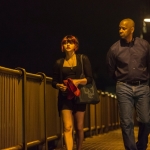 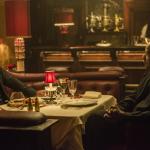 One thought on “The Equalizer”