The Decent One
By: Paul Brenner

Heil, how are ya?

Just in time for the high holy days comes The Decent One, Israeli filmmaker Vanessa Lapa’s epistolary documentary of SS leader and mass executioner Heinrich Himmler, culled from a treasure trove of personal letters, diaries and photographs found in Himmler’s home at the end of World War II, owned by Lapa’s father.

Lapa’s film is like a Nazi version of Love Letters, with Himmler’s letters being read by voice over actors as they recite the contents with photographs and film footage filling the visual void. In order to compensate for the lack of original visual material of Himmler, Lapa regrettably chooses to overdo special effects over the film footage, often to jarring extremes. (There are far too many crisp, clean sounds of gunshots, explosions, and tramping feet layered over silent footage, effects so overdone that they could have been designed by Ed Bernds of Three Stooges fame.)

Lapa charts the course Himmler’s life through his letters beginning with Himmler as a youngster, his courtship of wife Margarete, their marriage, the birth of a daughter (Gudrun), and his involvement with his secretary-turned-mistress Helga. And, oh yes, his rise as a student in Munich and the germination of his anti-Semitism, culminating in his joining of the Nazi Party. We follow Himmler through his family correspondence somewhat elliptically as he rises in rank to become a leader in the SS and orchestrates the construction of the concentration camps with his clean and efficient methods of extermination in the doctrine of the Final Solution, where millions of Jews, Gypsies, Communists and homosexuals met their demise via state regulated murder.

Unfortunately and unwisely, Lapa concentrates her focus on the family life of Himmler as solely depicted in his letters and offers only the most basic details about Himmler the Nazi. There is no sense in the film about the internal politics of the National Socialists, nor does the film offer any examination of Himmler’s rise through the ranks. The only thing we get is that for Himmler it was hard work constructing Dachau and overseeing the killing of millions of Jews. He writes to his wife, “Despite all the work, I am doing fine and sleeping well.”

The portrait of Himmler that emerges from Lapa’s absorption on his home life is a troubling depiction of Himmler as a devoted father (there are photos of Himmler smiling and posing with a fishing pole with his happy family) and family man (he sends Christmas presents home to his family, and his family gets extra special presents when he takes trips to Treblinka and Auschwitz). Himmler’s monomaniacal obsessions can be seen in their genesis in Himmler’s announcement to Margarete when they first begin their courtship as he numbers his letters to her. That sense of orderliness and method became the numbers upon the arms of his concentration camp victims and his desire for clean executions, graduating from executions by death cars to the gas capsules and the ovens. Death by efficiency and design.

Knowing what we know about the excruciating evils that Himmler supervised under Hitler, it is a sick joke to hear letters narrated with closing lines like “Love and kisses, Your Daddy” or “An enduring kiss, Yours, Heinie.” Or to hear Himmler’s wife express happiness that her husband has finally been given a promotion (“There is still justice in this world.”).

The result of Lapa’s emphasis on the ordinariness of Himmler is that Himmler becomes a marginal figure in his own narrative — a Nazi Zelig. But this conclusion is perhaps even more disturbing – the normality of Himmler is a warning of the incipient evil and self-delusion in all of us. We are all Himmler. 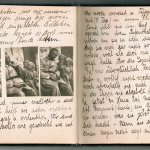 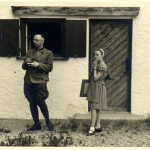