The Danish Girl
By: Mike McGranaghan

Maybe it's Maybelline?
Buy It From Amazon
Buy It On DVD
Buy It On Blu-Ray
Buy The Book

Roger Ebert once said that movies are like a machine that generates empathy. What he meant was that good films help us understand people who are different from us by emphasizing what we have in common: emotions, dreams, desires, and so forth. Movies like Sean Baker’s Tangerine and Tom Hooper’s The Danish Girl currently serve an important purpose by offering much-needed empathetic portraits of transgender people. The former is a modern-day tale of life on the streets, while the latter is based on the true story of the first person ever to undergo gender reassignment surgery.

Set in the early 1920s, the film stars Eddie Redmayne as Einar Wegener, a noted artist who shares a seemingly happy marriage with wife Gerda (Ex Machina‘s Alicia Vikander). She, too, is a painter, albeit one having a difficult time gaining entry into the competitive, picky art world. Neither of them thinks much of his tendency to do things such as pick up her nightgown from the floor and delicately fold it. But then something happens. When a female model is unable to show up for a sitting, Gerda asks Einar to put on a pair of stockings and shoes to fill in. He does, and something inside him is suddenly unlocked. He wants to do more of this. Together, the couple devises an alter ego for him, whom they dub “Miss Lili.” Gerda paints Lili, and Einar attends a fancy party in this guise. What starts off as a private joke takes on a life of its own as Einar wants to live more and more in this new identity. Eventually, he meets with a doctor (Sebastian Koch) who claims an ability to surgically transform him into a woman.

The Danish Girl looks closely at the idea that transgender people feel they were born the wrong sex. Once put in touch with his inner self, Einar comes to believe that he’s really a female — just one who, for some reason, came out looking male. Everything inside suggests femininity, and the only time he feels truly alive is when he’s living as Lili. Redmayne, who transformed so credibly into Stephen Hawking in the Oscar-winning The Theory of Everything, passes convincingly as a woman. More importantly, he captures the idea that Einar is fully liberated as Lili. It’s not just the clothes that change, it’s the attitude. Lili is more outgoing, more confident, and more at ease than Einar. She carries herself differently. Redmayne makes you feel the way this character has an emotional awakening (after years of repression) that is thoroughly life-changing.

He’s good, but the real star here is Alicia Vikander. The actress touchingly shows just how much Gerda loves Einar, supporting his increasingly-permanent transition, even as it means watching her husband slowly slip from her grasp. Some of the most affecting scenes in The Danish Girl are from Gerda’s point of view, as she struggles with a desire to see the person she loves find true happiness, while simultaneously looking for a way to cope with her own fears and sorrow. Vikander gives a magnificently layered performance that’s guaranteed to break your heart.

The Danish Girl has first-rate acting, a lush musical score from Alexandre Desplat, and gorgeous cinematography from Danny Cohen. What it lacks, somewhat detrimentally, is subtlety. The film might have made an even greater impact had it taken a slightly more low-key approach to the material. Director Tom Hooper (The King’s Speech, Les Miserables) apparently doesn’t believe in letting an idea sink its way under the audience’s skin when he could hit them over the head with it instead. Additionally, Hooper’s fussy visual style — which includes a distracting propensity for framing shots so that there are several feet of empty space above the actors’ heads — often calls attention to itself when we should be giving full focus to the characters.

There are also some moments where certain elements could have been expanded upon to the story’s great benefit. A short montage, for instance, shows that the medical field didn’t know what to make of, or how to treat, people like Einar Wegener. Physicians of the day believed it was a mental health issue like schizophrenia, or something that could be fixed via drilling holes into the head. More expansion of this would have really emphasized both how far we’ve come in our understanding of transgender issues and how far we still need to go.

The generally heavy-handed tone, self-conscious artiness, and occasionally incomplete themes hurt The Danish Girl to some degree, but the performances from Redmayne and Vikander are so good — and so authentic — that the film is impossible to ignore. Even if imperfect (sometimes frustratingly so), the movie gets to the heart of Einar’s pain, as well as to the fact that people are at their happiest and most fulfilled when they are being true to themselves. Einar Wegener walks a long, hard road to do that. It strips him of the life he had, but it also brings him a new life he could never have imagined. The Danish Girl makes you understand why the journey is so important to him. 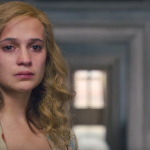 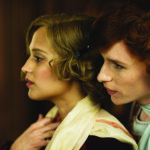 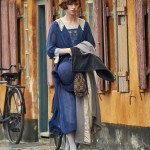 One thought on “The Danish Girl”