The Croods
By: Bill Gibron

Don’t let the accompanying credits fool you. Monty Python alum John Cleese may be listed as a co-writer for this prehistoric coming-of-age kiddie cartoon, but any Fawlty Towers-level of wit or humor has long since been sieved out by Dreamworks and its desire to create another cash cow animated franchise. As a result, The Croods is everything you’d expect from this kind of film, with a few caveats. We indeed wind up with an overabundance of lush visuals, a keen 3D eye, some slight characterization, and an experience that, while overall pleasant (and surely profitable) can’t match the moves made by the competition over at the House of Mouse. Forget The Flintstones — this is more like Ice Age with humans.

Grug (Nicolas Cage, doing some fine voice work) takes his role as protector of his caveman clan very seriously. His mantra is “Never Not Be Afraid” and he constantly argues with his wife, Ugga (Catherine Keener) about the perils of the outside world. Hidden in a cave most of the time, the family feels trapped, especially temperamental teen Eep (Emma Stone). She wants to see what lies beyond her dark and rocky lair, and with the help of a new guy named… Guy (Ryan Reynolds), she does. She also discovers that the Earth is literally crumbling beneath everyone’s Neanderthal feet and that they all must get to higher ground ASAP. So with his mother-in-law (Cloris Leachman), older son Thunk (Clark Duke), and psycho infant Sandy in tow, Papa Crood and the rest head out into the wild, not only to face their fears but to find shelter from the upcoming continental shift.

The Croods is really a mixed bag. On the one end you got stereotypes dressed up in animal pelts playing at domestic dilemmas ripped right out of an ABC Family TV film. Parents don’t understand their inquisitive adolescent, only to acquiesce to her when the complicated kid ends up being right. A good-looking loner with questionable motives ends up being a good guy with an equally endearing intent. The fat kid gets mocked for his size while the baby becomes a brutal biological punchline. It’s as if Family Guy found a leftover script from that old ABC puppet series Dinosaurs and decided to cast the Griffins in their own goofball take on Land of the Lost. It doesn’t always succeed.  But on occasion, it does.

Granted, there are a few good lines here, jokes at the expense of people and period. There’s also a scene-stealing little creature named Belt that’s guaranteed to give the wee one’s merchandising “must have” fits. But the best part about this otherwise standard family film is its character and creature design. Like a paint box fueled with freak-out hallucinogens, the prehistoric animals here are unlike anything you’ve seen before. Rainbow hues mesh into menacing teeth, recognizable archeological fossils fuse with other day-glo dangers. As in Avatar, we have an unique landscape housing an otherwise ordinary story. But unlike that James Cameron smash, The Croods is too cartoonish to expand its predetermined demographic.

Perhaps had Cleese been kept on as a contributor, had the overall tone moved from manic (and the ever-present 3D rush doesn’t help) to more meaningful, The Croods wouldn’t have felt so prepackaged. It’s a lot better than some of the titles aimed at tykes, but anyone older than 10 may be hard pressed to find anything of value here outside of engaging eye candy. 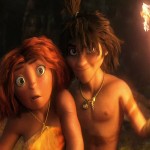 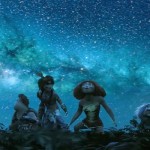 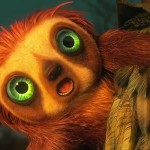 3 thoughts on “The Croods”