The Conjuring
By: Bill Gibron

We need to get a gardener here, stat.
Buy It From Amazon
Buy It On DVD
Buy It On Blu-Ray

It’s something that horror filmmakers frequently forget: atmosphere. You can have all the false jumps and bloodletting you want, but at the end of the day, it’s mood and tone that turns that casual bump in the night into something truly terrifying. From the moment we meet Ed and Lorraine Warren (Patrick Wilson and Vera Farmiga) in James Wan’s brilliant The Conjuring, we understand the dark forces at play. Even as they address the concerns of two single nurses and their demonic doll in the late 1960s, this couple gives off an aura of having battled the paranormal head on. Even before we meet the main family in the film, the Warrens warn us not to take things lightly. What they’ve seen will soon become the reality that fuels an audience’s worst nightmares.

As noted supernatural investigators (their most famous case being The Amityville Horror), real-life figures Ed and Lorraine Warren have supposedly kept one unholy case under wraps — until now. The tale of what happened to the Perron family — mother Carolyn (Lili Taylor), father Roger (Ron Livingston), and their five daughters Cynthia (Mackenzie Foy), Christine (Joey King), Andrea (Shanley Caswell), Nancy (Hayley McFarland), and April (Kyla Deaver) — when they moved into a decrepit old farm house is indeed ghastly. It’s a lesson in how the past, and the occasional Satanic presence, can turn a normal life into a living hell. Purchased at an auction, the home was apparently the site of witchcraft, ritualistic sacrifice, and murder. The Warrens are asked to investigate when Carolyn and Roger fear something is targeting their children. Little did they know that the hazard was much, much worse.

With Saw and Insidious already part of his relatively new oeuvre, James Wan is quickly becoming the latest master of post-modern macabre. His control of material is expert, his ability with actors above reproach. Between Wilson, Farmiga (who nails her real life counterpart), and Taylor, you’ve got a trio of adults who keep things perfectly grounded in reality while all manner of macabre mayhem is breaking loose around them. Add in the young actresses, who never once slip into shrill annoyance, and you’ve got the pieces of a particularly effective fright film. Then Wan works his magic, establishing the undeniably creepy mood of his moldy old farmhouse, offering glimpses of everyday junk that will soon spawn significant scares.

Indeed, the entire backdrop here — the dusty and cobweb-filled “secret” cellar, the antique bureau in the oldest daughter’s bedroom, the rickety pier down by the lake — all scream horror, but Wan works to keep us off guard, to imagine a rational explanation for things that will quickly grow inexplicable and unreal. Wan doesn’t overdose on the typical terror mandates. There is minimal blood and almost no true gore to speak of. Instead, The Conjuring’s R-rating comes from a clear understanding of what makes an audience uncomfortable. The dread is driven up several significant notches before being released in a jolt or shock, and then the suspense is reset and restarted. Things go on like this for nearly two hours, and it’s a relentless, nerve-racking ride.

By staying old school, by mimicking movies like The Legend of Hell House and the original Haunting, Wan manages to better those titles which treat the genre like extended cinematic autopsies. He’s interested in scaring you, not grossing you out — and this is coming from the man usually blamed for starting the whole “torture porn” genre in the first place. James Wan has come a long way from his days as a Sundance darling. The Conjuring is a classic, one of the best traditional horror movies ever made. It’s a terrifying journey into a supposedly true story, and it is indeed frightening. 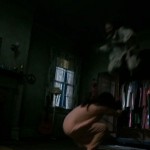 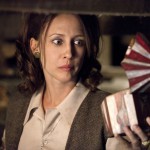 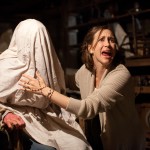 16 thoughts on “The Conjuring”