The Commuter
By: Valerie Kalfrin

Is this seat taken?
Buy It From Amazon
Buy It On DVD
Buy It On Blu-Ray

Up to his elbows in a conspiracy, Liam Neeson’s insurance salesman muses in The Commuter, “Sixty years old. What have I got left to offer?”

Plenty. Neeson, whose brawny physique and dulcet brogue belies his dramatic depths (Schindler’s List, last year’s Silence), actually is sixty-five. But in the ten years since the January thriller Taken, he’s evolved into a reliable older man of action. The Commuter is his fourth collaboration with director Jaume Collet-Serra (who helmed Neeson’s other wintertime thrillers Unknown, Run All Night, and Non-Stop), and its clever script as well as Neeson’s agreeable presence make this an entertaining trip.

Neeson’s Mike MacCauley is a former cop who sells insurance to support a comfortable upstate New York lifestyle. An opening montage shows him bickering and laughing with his wife (Elizabeth McGovern of Downton Abbey) and son (Dean-Charles Chapman of Game of Thrones) before his daily Manhattan commute.

He’s laid off one day, becoming the perfect mark for Joanna (Vera Farmiga of Up in the Air and Bates Motel). A behavioral expert, she baits him with a question: Could he pinpoint a particular passenger before the last stop for $100,000? Any Richard Matheson fan, let alone the lit lover that Mike is (he reads Wuthering Heights and other classics) can sense this scenario has strings, but Joanna glides away without explanations. She leaves him until the next stop, roughly four minutes away, to decide.

Mike indulges his curiosity and uncovers the $25,000 down payment Joanna said was hidden in a restroom. That’s all she needs to reveal some threats, making it clear that he’s along for the ride.

The second act unfolds roughly in real time as Mike puzzles out whom Joanna wants and why. He also tries to get help without getting killed. The script by Byron Willinger and Philip de Blasi, along with Ryan Engle (Non-Stop and the upcoming Rampage), packs surprises and creates suspense in how Mike thinks on his feet. It also touches on how the little we learn from cursory interactions can backfire. The passengers on the Metro North to Cold Spring are a typical eclectic bunch, but Jonathan Banks (Breaking Bad, Better Call Saul), Shazad Latif (Star Trek: Discovery), Roland Møller (Atomic Blonde), Florence Pugh (Lady Macbeth), and Andy Nyman (Ghost Stories) embody them nicely. Sam Neill (Peaky Blinders) and Patrick Wilson (The Conjuring 2, Insidious: The Last Key) round out the cast as the cops.

The third act stretches credibility, but Neeson still sells the fisticuffs and earnestness of a reluctant older action hero. His longtime fans, and viewers of a certain age, will find The Commuter, despite its flaws, a fun train to catch. 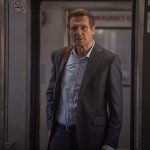 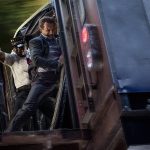 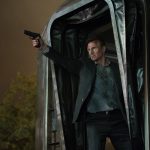