The Cloverfield Paradox
By: Valerie Kalfrin

Is anybody out there?
Buy It From Amazon
Buy It On DVD
Buy It On Blu-Ray

The Cloverfield Paradox, a surprise sequel to 2008’s shaky-cam monster flick, aims for sci-fi thrills but strands its talented cast in space, despite literally giving them a helping hand.

With Cloverfield and 2016’s 10 Cloverfield Lane, producer J.J. Abrams seemed to have launched a Twilight Zone-style brand of eerie suspense. Although the loosest of threads connected the films’ events, both movies unspooled an overarching mystery—the latter more successfully in its taut bunker setting with characters second-guessing one another. As a writer, director, or producer, Abrams loves teasing questions to keep an audience intrigued (TV’s Lost and Westworld, the rebooted Star Trek films, 2015’s Star Wars: The Force Awakens). If neither Cloverfield film provided explicit answers, they still provided entertaining jolts.

The Cloverfield Paradox—produced by Abrams and now streaming on Netflix—aims to explain why the monster from the original ravaged New York City. The answer arrives within the first act, leaving the remainder a muddy disappointment.

Gugu Mbatha-Raw (Concussion, the standout Black Mirror episode “San Junipero”), David Oyelowo (Selma, Queen of Katwe), Daniel Brühl (Captain America: Civil War, TV’s The Alienist), and Ziyi Zhang (Memoirs of a Geisha) are among the multinational crew of astronauts aboard a space station tasked with operating a device that could solve the Earth’s energy crisis. This is no mere fuel shortage but a clear end of resources, with multiple blackouts each day and frustrated nations on the brink of war.

By the end of the opening credits, the team’s device hasn’t yet worked after two years of tests. All that changes after a convenient news broadcast speculating that this gizmo could either save the world or mess with the fabric of space and time.

The setup brings to mind 1997’s underrated Event Horizon. But instead of events unfolding through any narrative drive, the script by Oren Uziel (22 Jump Street, Netflix’s 2017 crime thriller Shimmer Lake) tosses out one nonsensical development after another. It’s like watching a story assembled by Mad Libs.

One character winds up skewered by wires and pipes inside a wall. Another loses an arm—but not for long. The limb reappears to write down some key information none of the characters would have known otherwise. How did the arm become sentient? Who knows? Not since the Addams Family has a hand been this helpful.

Mbatha-Raw’s communications officer has the only depth as a mother who must decide when and where to use the energy device, giving the plot a bit of a dilemma. But the others are sketched so broadly that any choice or sacrifice becomes meaningless.

Overall, it’s an uninvolving answer to something you might not have been yearning to discover in the first place. 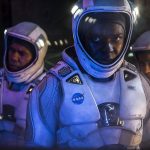 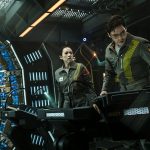 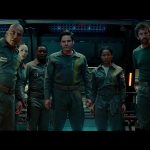