The Call
By: Trevor Fehrman

Don't accept the charges.
Buy It From Amazon
Buy It On DVD
Buy It On Blu-Ray

I know you, reader. I know how you feel about things. You’ve often said to yourself “You know, I really want to like The Silence of the Lambs, but I just wish that the serial killer’s motive made no sense, that the smart procedural aspect was replaced by a series of increasingly improbable coincidences, and that instead of a psychologically complex FBI trainee as our protagonist, we had a lady who answers phones all day.” If I just reached deep inside your psyche, then The Call is what you’ve been waiting for.

The principal events in the film take place over the course of one day, while the full force of the LAPD searches for Casey (Abigail Breslin of Little Miss Sunshine), a teenager abducted by a known serial killer. Halle Berry plays the 911 operator who gets the call from Casey while she sits in the trunk of the killer’s car.

This is a bad movie, but it’s a challenging movie to review because there are aspects of it which are superb. Director Brad Anderson (The Machinist) is no slouch, and it shows in every scene. The Call looks good. Like, really good. The editing and photography are bristling with creativity and brio, but it’s rarely flashy. The way in which Anderson gives the audience a sense of time passing, of daylight slipping away and with it our chances of rescuing Casey from her gruesome fate, is masterful. The acting is also extraordinarily good for a movie this bad. I wasn’t totally on board with Little Miss Sunshine and I was a bit skeptical of the halo effect around Breslin in its wake, but this young woman brings it in The Call. Breslin is 16 years old and spends a third of the movie in the trunk of a car while weeping (so, roughly, two to three weeks of production). She knocks it out of the park. But Halle Berry was the real shocker. Her performance, like that of Breslin (as well as villain Michael Foster, played by Michael Eklund), is completely out of proportion with the quality of her role. I’ve honestly never seen a better performance out of the woman, and that’s including Monster’s Ball.

No, I think we know where to place the blame for this particular hot mess: screenwriter Richard D’Ovidio, the man who gave unto the world such benefactions as the oh-so-ingeniously-titled Thir13en Ghosts and, lest we forget, the electrifying Steven Seagal and DMX vehicle Exit Wounds. In The Call, tension is created through extreme implausibilities (there are 18 million people in the greater LA area, but Halle Berry talks to the same killer twice in six months?), artificially drawn out sequences, irrational, almost random behavior on the part of the heroes, and that hoary thriller mainstay, things suddenly jumping out at you. I won’t spoil the ending, in case you end up losing a bet which requires you to go see this thing, except to say that calling it nonsensical would still set your expectations too low.

The mystery of The Call isn’t “where’s the killer,” it’s “what witch’s curse got triggered so that all these talented people ended up in this coarse, derivative topiary of banality?” 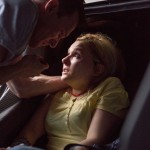 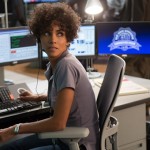 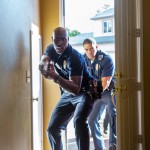 3 thoughts on “The Call”