It is a great comfort that a restored 4K version of the epiphanal silent film classic The Cabinet of Dr. Caligari is opening on October 31, the same day as the theatrical premieres of Nightcrawler, Before I Go To Sleep, and a re-release of Saw – three films that owe their very existence and bleak attitude to that old German masterwork.

The Cabinet of Dr. Caligari is in a class by itself, a standalone monolith of cinema upon which portions were chipped off and planted that grew into the horror, suspense, detective, and film noir genres. But Caligari is a unique and rich bouquet of dread with style and attitude to spare. Genres can extract pieces of Caligari, but the undiluted force is all there in the original.

The mood is created instantly. Two ghostly, off-kilter men are sitting on a cantilevered bench amongst debris of tangled, dead branches. The older man utters to the younger, “There are spirits around us. They are all around us. They have driven me from hearth and home, from wife and child.” The young man, Francis (Friedrich Fehér), staring at something only he can see, suddenly points out a spectral woman in white, Jane (Lil Dagover), whom Francis introduces as his fiancé, and declares, “What she and I have experienced is yet more remarkable than the story you have told me.”

We are then plunged into Francis’s tale and to the small town of Holstenwall, where Francis and his friend Alan (H.H. von Twardowski) attend a traveling carnival and come upon a creepy mountebank barker, Dr. Caligari (Werner Krauss) and his lithe freak show attraction Cesare (Conrad Veidt), an even more creepy somnambulist who awakens from his trance to tell fortunes. For Alan, his fortune is not a good one. He will die tomorrow at dawn. Cesare makes sure his prophecy is fulfilled by murdering Alan in his bed at dawn. Francis, suspecting foul play, conducts his own investigation into the killing and discovers Caligari to be the mad genius behind a series of mysterious murders, enlisting a mesmerized Cesare to commit the killings.

Director Robert Weine, screenwriters Carl Mayer and Hans Janowitz, and, particularly, the set design by Hermann Warm, Walter Reimann, and Walter Roehrig create an unsettling world as seen through the eyes of a madman – a world without right angles and jagged, painted-on shadows and scenery, a production style based on the Expressionist art movement of Wassily Kandinsky and Franz Marc. Here is a world of objective insanity with no escape, no exit… point-of-view taken to its extreme limits. The actors follow suit, performing in an overblown, spastic acting style that is as disturbing and jarring as the décor. All contributing to an extremely unsettling viewing experience.

All of this fetid dementia creates an uncomfortable climate of fear and derangement that some critics (notably Sigfried Kracauer in From Caligari to Hitler) cite as foretelling the rise of Hitler in Germany. Reading the film in this way, it frames the film as a creaky relic in a historical past. But this pervasive attitude of shrieking lunacy has taken hold in our contemporary media infused times — pervasive social media, the Ebola scare, ISIS, you name it. The film couldn’t be more current. It’s subversion depicts society as a hopelessly out-of-control reflective madhouse. All of which is saved and brought to normal by the framing story of the film.

But even the framing device does not quite restore the world to normality. At film’s end, Francis is revealed to be an inmate in a madhouse. The head of the asylum declares he can now heal Francis’s mental derangement. But the crazed set design is still in place and, in the final fade-out, the asylum director pauses with a murderous look in his eye. Caligari is as potent, disturbing and dangerous today as in 1919. Let the nightmares of the soul continue. 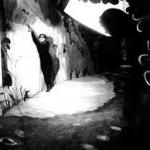