The 10 Scariest Scenes in Modern Horror Films
By: Bill Gibron

Some say that horror films provide a release, a chance to face our fears head on and experience them without any real repercussion or harms. It’s a catharsis, a chance to spout off the excess angst building up inside. Of course, in order to be scared, someone has to make a scary movie, and when they do, they have to make sure that there are scenes or individual moments that resonate with the apprehensive. A film like James Wan’s Insidious might be nothing more than a series of such shocks, but it definitely gets the job done. With Chapter 3 in the horror franchise hitting theaters this summer, here are 10 other sequences guaranteed to get under your skin. Each one will bring you to the very tip of terror-and then push you over the edge. 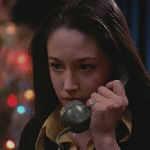 This is a weird choice, but a good one. Bob Clark made his name with films like Porky’s and A Christmas Story, but during the ’70s, he came up with a holiday themed horror story that will set your nerves on edge. A group of sorority sisters are terrorized by an unseen killer, our villain picking the nubile young beauties off one by one. Even worse, he calls to harass them, his voice a surreal combination of baby talk and unearthly hate. It’s chilling and unnerving.

#9 – Mike in the Basement (The Blair Witch Project) 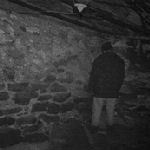 For the entire film, we’ve waiting for something real to happen. While noises in the night are effective in creating fear, we want answers, not more ambiguity. So when documentary filmmaker Heather (Heather Donahue) and her cameraman Mike (Michael Williams) go searching for the lost third member of their party, we hope they find something. When they end up in an abandoned house in the middle of nowhere, they come face to face with the legend that drove them there in the first place. 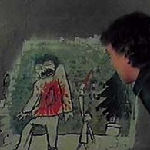 It begins with a child’s shoes, and a bloody knife. It ends with our hero, a music teacher and performer (David Hemmings) breaking into an abandoned home, looking for clues in the deaths of several people. What he finds in a baroque space loaded with trepidation, each corner his flashlight captures (oh, did we mention Marcus decides to do this in the dead of night?) leading to more unanswered questions, and more unbridled terror. What he finds will send a shiver up your spine. 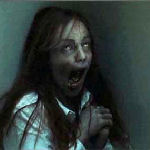 In order for any horror movie to work, the main premise must deliver. If you argue that a mysterious videotape will kill you a week after watching it, it better have some amazing visuals, and it better end up with a dead body. During the opening of this film, two teen girls discuss the haunted visual on the aforementioned cassette before one of them reveals she’s already seen it — and it’s now the predicted seventh day. A few minutes later, it’s creepy corpse time. 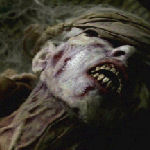 David Fincher’s fascinating serial killer drama is about as perfect a film as you can find. No shot is out of place, every moment is expertly directed. Nowhere is this more true than when a series of clues lead the police to the lair of a disturbed pedophile. When they finally break down the door and search the premises, they find what they presume to be is a dead, deteriorating body. Instead, these stalwart law enforcement officers are stunned when “Sloth” suddenly “responds.”

#5 – Cheryl is Possessed (The Evil Dead) 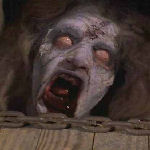 A group of college kids rent a cabin in the woods. While investigating the property, they find a tape machine, a dagger made out of bone, and a book bound in human flesh. They soon learn that the house belonged to an archaeologist who discovered an ancient manual of rituals, capable of summoning demons. So naturally, they do they very things they’re not supposed to do, leading to one of them becoming possessed. Her Satanic warnings and body contortions are the stuff of nightmares.

#4 – Searching for Survivors (Day of the Dead) 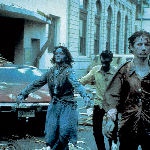 This is one of the best openings of any George Romero zombie flick. A group of scientists, aided by a few remaining members of the military, land a helicopter in an abandoned Florida town, hoping to find a few survivors. What they come across, instead, is an entire city filled with the undead, their plaintive cries sending up a screech so horrifying it will make the hairs stand up on the back of your neck. It’s atmospheric, effective, loaded with imaginative make-up work, and incredible suspenseful. 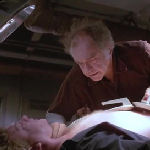 A master class on practical effects and Rob Bottin’s skill with same, this sequence encapsulates what’s so special about John Carpenter’s reboot of the ’50s B-movie. As the crew of an Antarctic research facility try to deal with the sudden appearance of a shape-shifting alien creature in their midst, one of them goes down from a seeming heart attack. When standard CPR doesn’t seem to help, the defibrillators are brought out. Once the electricity hits the victim’s prone body, the terror truly begins. 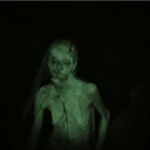 For the entire film, we’ve wondered what triggered this zombie-like outbreak in a Spanish apartment complex. When intrepid reporter Angela Vidal (Manuela Velasco) makes her way to the penthouse, she discovers a diabolical conspiracy to prove that demons are real, possession is possible, and that the Church is trying to utilize the findings to urge more faith in God. Then our plucky heroine opens the ceiling hatch to the attic, and all hell literally breaks loose. Via night vision, we see the horror unleashed. 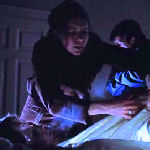 As, perhaps, the scariest movie of all time, it would make sense that some scene from William Friedkin’s 1973 masterpiece would make it onto the list. We’ve picked this particular moment because, unlike others where chaos and blood/vomit abound, this is a calm, silent shiver. When Chris MacNeil’s assistant summons Father Karras (Jason Miller) to little Regan’s (Linda Blair) room, you expect some sickening fireworks. What we get instead is a spine-chilling moment of dread so intense it makes the rest of the movie seem tame by comparison.