Back in the days before the post-modern movement, Hollywood loved to get holier than thou (literally speaking). From its earliest silent days to the time right before Modernism took over, the Bible was milked for as many movie subjects and stories as possible. Granted, some contemporary filmmakers have found audience favor in going with the Gospel (Mel Gibson’s The Passion of the Christ, Martin Scorsese’s The Last Temptation of Christ), but for the most part, we don’t really see literal recreations of the various Old and New Testaments. Even this year’s surprisingly great Noah took liberties with the lessons of Genesis. Below you will find 10 of the best Bible epics ever. By using the word of God, and then giving it the old Tinseltown tweak, these movies made even the most skeptical moviegoers believe… in the Bible’s entertainment value! 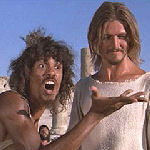 It remains one of the most brilliant ideas for a stage adaptation ever. Norman Jewison, understanding the rock opera’s counterculture appeal, decided to accent the “Spirit in the Sky” attitude of the early ’70s by retaining a mostly young, rebellious (read: hippie) cast and carting them off to the Holy Land to recreate Andrew Lloyd Webber and Tim Rice’s rollicking songs in the very place that inspired them. The results remain one of the best recreations of the Passion ever put on film. 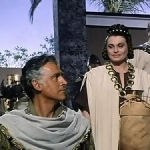 Okay–so it’s a bit cheesy, and Stewart Granger’s Lot is a bit too contemporary for such an ancient tale, but the scope of this Franco-Italian-American co-production and its message remain as powerful as ever. In fact, the focus on slavery as part of the narrative reflects the then-growing Civil Rights movement and its merits. Of course, by today’s standard, one could make a drinking game out of the unintentional laughs earned from the constant reference to “Sodomites,” but this is still a solid Bible lesson. 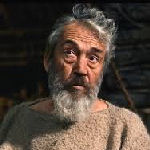 John Huston was hired personally by producer Dino De Laurentis to bring the first 22 chapters of the Book of Genesis to the big screen, and while it flopped upon initial release, critics have since warmed to its attempts at epic spirituality. Of course, the Garden of Eden material raised a few eyebrows over its (implied) nudity, and Huston himself chewed a bit of scenery as the determined Noah. Standout performances include Richard Harris as Cain and George C. Scott as Abraham. 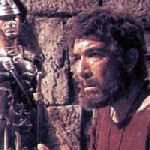 Anthony Quinn is the title character, the notorious criminal that the crowd chooses to save over Christ just before the Crucifixion. Using the novel by Nobel Prize-winning Pär Lagerkvist, we see what happens after Barabbas is set free and Jesus dies and is resurrected. In fact, we go some two decades into the future as this historic figure suffers several cosmic repercussions from that fateful decision. Quinn is excellent, and the film itself is known for filming the final moments of Christ’s life during an actual solar eclipse. 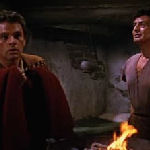 The Robe always receives a lot of attention from fans of the subgenre because of the superb cast. There’s Richard Burton, Jean Simmons, Victor Mature, Michael Rennie, Dean Jagger, and Richard Boone among the cast of thousands. The story, adapted from Lloyd C. Douglas’s novel, was written to answer a question the minister turned author was always asked about: What happened to the Roman soldier who won Jesus’s garment in a dice game? This is the moving and psychologically complex reply. 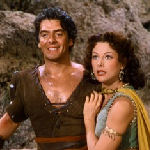 More Victor Mature here, this time playing the greatest strongman in the entirety of the Gospel. Of course, those of us who went to Sunday School know that Samson gained his strength from his… faith in God (not really his hair) but this over-the-top epic, filled with dancing slave girls, hokey love scenes, rampant scenery chewing, and a last act destruction of a temple that still stands up, even against today’s CG standards, retains much of the power inherent in our hero’s allegorical tale.

#4 – The Greatest Story Ever Told 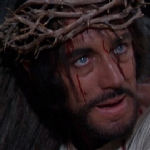 Yes, the actors hired by director George Stevens seem to be a who’s who of late ’50s/early ’60s Hollywood, including John Wayne as a Centurion, Telly Savalas as Pilate, and Ed Wynn as “Old Aram.” Still, for his first time performing in an English language film, the soon to be legendary Max von Sydow strikes an impressive pose as Christ, and the movie itself is solemn in its treatment of the subject (from the Nativity through the Crucifixion). You just have to get past a few clunky performances along the way. 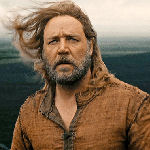 Noah is a Biblical epic for those who question organized religion. It demands you drop all the preconceived notions you have about the “animals ambling two-by-two” tale and face the crisis of belief by both our title character and his family. Noah is not sure if God wants mankind to survive the proposed flooding. This causes the kind of moral handwringing you expect from a religious story, but director Darren Aronofksy turns it into something even more compelling — a question of the audience’s faith as well. 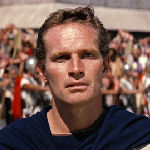 It’s no surprise that the final two films on our list star the seminal figure for pre-post-modern faith films. Charlton Heston won his only Oscar playing the title role here, a wealthy merchant who goes to bat for the local Jewish population when his friend, a Roman tribune named Messala (Stephen Boyd), returns with new orders. An accident causes our hero to become imprisoned and soon he is suffering along with the people he swore to protect. He then falls for the teachings of Christ. 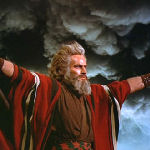 Like the film at the number two slot in this list, this is a remake. Indeed, original director Cecil B. DeMille returned for what would be his last (and most successful) big screen effort. Starring Charlton Heston as Moses and Yul Brenner as the Pharaoh Ramses, we have the Jews in bondage, our unlikely leader’s confrontation with the Egyptians in power, and of course, the Exodus. Thrown in the Burning Bush, the famed tablets, and some Greatest Story level casting (Edward G. Robinson? Vincent Price?) and you’ve got one epic entertainment.