The 10 Best Time Travel Films of All Time
By: Bill Gibron

It’s one of sci-fi’s most popular go-to narratives. Whenever a story needs a boost, or a plot requires a trick that traditional reality can’t pull off, the space-time continuum becomes the back-up plan. Characters in trouble? Send them back in time. The circumstances are headed for untold disaster? A journey backward of forward should calm the pre-apocalyptic waters. Of all the mediums where time travel can exist, film seems to be its best home. Indeed, Hollywood loves a good bi-location setup, and there have been some classic movies made as the result. Here are 10 of the best (though there are many, many more), each one showing why, in either the past or future, the present can be found. Or fixed. 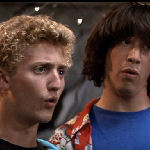 One of the best teen comedies of the late ’80s, this combination of Valley Dude silliness and historical satire argues that even the biggest dopes can one day become the saviors of the world. Indeed, all Bill S. Preston Esq. (Alex Winter) and “Ted” Theodore Logan (Keanu Reeves) need is a passing grade in high school history to fulfill their destiny as The Two Great Ones. Via a phone booth time machine, they get to travel around the past, picking up famous figures — and some tutoring — along the way. 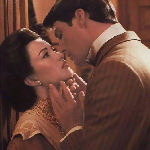 Christopher Reeve’s Richard Collier is a playwright celebrating his latest work when a kindly old woman gives him a personal note. All it says is “Come Back to Me.” He finds out later that she was a famous actress obsessed with time travel, and that he has some connection to her past — her very distant past. Soon, our hero is back in 1912, romancing the beautiful Elise McKenna (Jane Seymour). A satisfying love story with a devastating ending, this is a true overlooked gem. 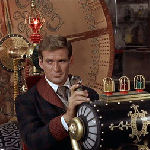 One of H.G. Wells’ most famous books meets up with celebrated animator and director George Pal for a brilliant distillation of the novel’s main themes. While it deviates from Wells’ work a bit, it still delights with its imaginative flights of fancy. It also has some of the best pre-CG effects, including stop-motion sequences highlighting the passage of time. You want proof of its excellence? Two more movies were made from the source (1978 and 2002) and both, even with upgraded technology, were terrible. 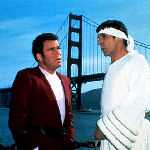 Gene Roddenberry loved the idea of taking his futuristic characters and sending them back into various aspects of the past. That’s why you have episodes of the original series showcasing the crew of the Enterprise in the Depression era, and a parallel Nazi-ruled universe. This fourth installment in the film franchise takes the gang to San Francisco circa 1986 and highlights a wonderful directorial turn by Mr. Spock himself, Leonard Nimoy. Filled with lots of fish-out-of-water humor, this is one of the best Trek movies ever. 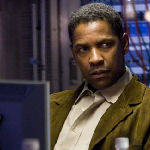 When an act of domestic terrorism devastates New Orleans, ATF Special Agent Douglas Carlin (a defiant Denzel Washington) becomes obsessed with a woman (Paula Patton) who was, apparently, one of the victims. When he learns that there is a way to go back in time and perhaps stop the crime before it happens, he jumps at the chance to participate. Of course, if he does, it will create an alternate timeline which could have devastating impact. One of the star’s best collaborations with the late director Tony Scott. 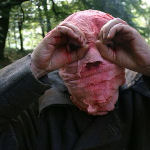 While renovating his home, a man looks out his back window and sees a woman undressing. When he goes to investigate, he is attacked by a psycho wearing bandages on his face. A nearby scientist offers sanctuary, but our hero ends up in a machine that can send him an hour back in time. What happens next involves a series of circular loops that always lead back to our main character. One of the most inventive and engaging foreign films on the sci-fi subject. 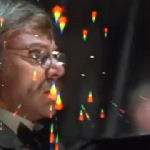 H.G. Wells again, this time not as author but as character. The brilliant Malcolm McDowell is the writer, who also fancies himself an inventor. When he whips up his own version of the book’s time machine, it is commandeered by a surgeon friend named John Leslie Stevenson (an amazing David Warner) who turns out to be none other than Jack the Ripper himself. Soon, both Victorian men are moving through modern day San Francisco playing a very deadly game of cat and mouse . 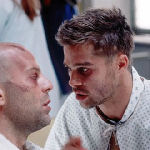 A plague has devastated the entire planet, and it can all be traced back to an environmental terrorism group known as the 12 Monkeys. So prisoner turned time travel experiment volunteer James Cole (Bruce Willis) is sent back to the present in order to bring back clues about what happened, as well as some manner of hope for humanity. Before long, her runs into a legitimate lunatic (Brad Pitt) who may be the man behind the mayhem. A Terry Gilliam treasure loosely based on the French short La Jetee. 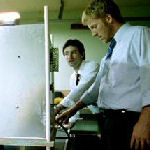 Shane Carruth’s debut film is one heck of a brain buster, the kind of serious science fiction no one makes anymore. While working on inventions in their free time, a group of corporate engineers accidentally stumble across a curious side effect of one of their devices. Initially using it to make money in the stock market, they become more adventurous with its abilities. With its intertwining narrative threads and dense tech talk, it can be hard going at first. Once you get into it, it becomes a masterpiece. 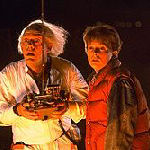 Poor Marty McFly (Michael J. Fox). His family is a bunch of failures, and it looks like his life is headed in the same direction — that is, until he discovers that his buddy Doc Brown (Christopher Lloyd) has turned a DeLorean into a time machine. Accidentally sent back to the moment when his parents meet, he must try and set things right while avoiding the interference of town bully Biff (Thomas F. Wilson). A near perfect film, one that’s both clever and complex, including a finale that will have you on the edge of your seat.