The 10 Best “Presidents in Peril” Films of All Time
By: Bill Gibron

He’s the Head of the Executive Branch, one part of the three-pronged checks and balances that keeps our fragile democracy afloat. He (and potentially, she) is often called the most Powerful Leader in the Free World, the Commander in Chief, and/or the POTUS. In any language, he (or she) is the President of these United States, and as such, a target for those who want our way of life eradicated from the planet. There have only been four successful assassinations in the history of the office, but that hasn’t stopped Hollywood from placing the Prez in constant peril. Here are 10 films which focus on the boss as backstory for all manner of political and social intrigue. There’s action a-plenty, and nary a filibuster or a veto in sight. 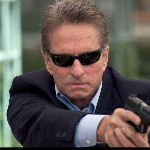 Michael Douglas is a Secret Service Agent who learns that the recent death of a compatriot actually has something to do with a plot to assassinate the President. And wouldn’t you know it — he’s having an affair with the First Lady (Kim Basinger). Everything is eventually traced to a rogue agent in charge of protecting the POTUS at the next G8 summit. Riddled with plot holes and implausibilities, the threat to the Commander in Chief is just a red herring for more backroom soap operatics. 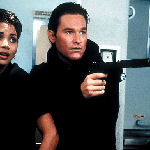 A hijacked aircraft loaded with deadly nerve gas is headed right to the White House, and it’s up to Kurt Russell and a pre-bloated Steven Seagal to save the day. They come up with a daring plot that involves a mid-air transfer to the stricken plane to disarm and disable the terrorists inside. Helmed by editor (Lethal Weapon, Die Hard 2) turned director Stuart Helm, this succinct little action film keeps the danger far from the Leader of the Free World, but he’s the target, nonetheless. 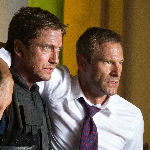 A group of North Korean rebels storm Washington D.C., taking the President and most of his cabinet hostage. Moving them into a secret bunker underneath the White House, they must rely on ex-POTUS bodyguard Mike Banning (Gerard Butler), a former Special Force soldier, to save them. About as cheesy as a visit to Wisconsin and loaded with laughable plot contrivances, the direction by Antoine Fuqua, and the overacting by the cast turns this into a terrific guilty pleasure. Much better than White House Down. 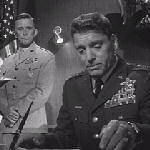 It’s the frigid beginnings of the Cold War. The U.S. military, angry with the President for preparing to sign a nuclear disarmament treaty with the USSR, plots a coup. The Joint Chiefs of Staff are involved, as are members of Congress. It’s up to insider Colonel Jiggs Casey (Kirk Douglas) to prove the conspiracy and out the traitors. Thus begins a complicated game of cat and mouse, made even more intense by the skilled direction of John Frankenheimer. One of the great pot-boiler political thrillers. 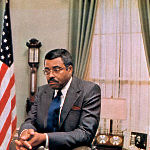 Ever wonder what would happen in the United States of America had a black man for a President? Not now, but way back in the early ’70s? That’s the premise for this stunning social allegory in which the President Pro-Tempore of the Senate (James Earl Jones), through a series of unexpected tragedies, assumes the highest office in the U.S. Naturally, the sitting Secretary of State (William Windom) is unhappy with having to serve under a minority, and goes out of his way to undermine this new President. 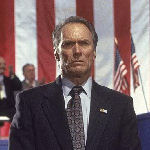 Clint Eastwood is a Secret Service Agent who feels responsible for the death of JFK in Dallas on November 23, 1963. When he receives a call from someone named “Booth” (John Malkovich), threatening to kill the seated President during his reelection bid, our hero goes on high alert. While the assassin practices with an untraceable gun and gets ready to destroy democracy, our aging bodyguard starts to doubt his own abilities. Wolfgang Peterson manages to make this goofy concept work with a lot of help from his capable actors. 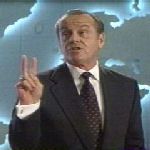 When the Earth is “invaded” by oddball aliens from the Angry Red Planet, they have only one target in mind — the slightly clueless doofus of a POTUS played by none other than Jack Nicholson. As the spacemen take out the Congress and several global sites, our spurious leader holes up in his high tech bunker, avoiding the angry advice of his top general (Rod Steiger). While his time onscreen in limited, Nicholson’s take on the Leader of the Free World is a real hoot. 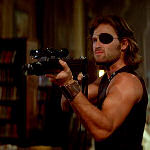 In the dystopian future of 1997 (which was 18 years ago, by the way), the President’s Air Force One Escape Pod, containing the Commander in Chief (Donald Pleasence) and an important speech, end up in the walled prison known as Manhattan. Hoping for a political miracle, the government turns to former war hero/present criminal Snake Plissken (Kurt Russell) to infiltrate the lawless urban penitentiary and save him. Thus begins a journey into future shock silliness, saved only by the sensational swagger of our lead. 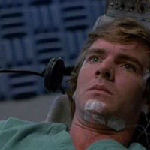 In another futuristic framework, scientists are working on waves for psychic specialists to “invade” the dreams of individuals. It’s supposed to help those who are suffering from severe psychosis and phobias. But someone is trying to drive the President crazy, using this newfound technology to kill him in his sleep. Dennis Quaid is the good guy looking to protect the POTUS. David Patrick Kelly is the villain, working in connection with rogue factions of the administration, looking to cause the Commander in Chief harm. 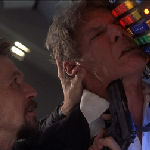 He’s the kind of U.S. President that many “Amu-ricans” can get behind. When his plane is hijacked by Russian extremists upset by the recent cooling of the Cold War, including one particularly pissed off party (Gary Oldman), James Marshall (Harrison Ford) decides to take matter into his own hands (or perhaps, more appropriately, fists). Fighting off the threat while his aircraft prepares to plunge into the ocean, this take no prisoners, ass-kicking politician gives new meaning to “Superpower.” A terrific action thriller with a great cast.