The 10 Best Movie Ass-Kickings of All Time
By: Bill Gibron

We can’t get enough of well done action. Heck, even mediocre thrills fill us with solid cinematic entertainment. From car chases to foot races, gun fights to swordplay, pitting man against his enemy (or monster, or machine) usually ends up in an entertaining, if unrealistic, catharsis. With Tom Cruise trying his hand — again — at the whole battling bruiser routine (as the title character of Jack Reacher), we are reminded of 10 terrific illustrations (with honorable mention shoutouts to Snatch, Fight Club, and anything with Jason Bourne) of the movie maxim, times when differences weren’t settled with smarts or semi-automatic weapons, but rather with pure human grit. 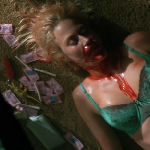 When Clarence Worley (Christian Slater) and his new bride, Alabama (Patricia Arquette), head off to LA to turn a bundle of coke into easy money, they are chased by a group of gangsters, led by Christopher Walken and his main hitman Virgil (James Gandolfini). In a California motel room, our little lady and the hired gun square off in a battle so brutal that it makes you wince more than once. And all the while, Alabama just laughs… and laughs… and laughs… 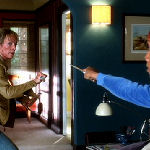 After she is left for dead by her fellow assassins, The Bride (Uma Thurman) decides to get revenge on those that wronged her. Awaking from her coma with nothing but pure butt-kicking on her mind, she first seeks out some information, and the home of Vernita Green (Vivica A. Fox). The two end up in a nasty knock-down, drag out involving everything from cereal to coffee cups. When the butcher knife comes out, however, all bets are off. 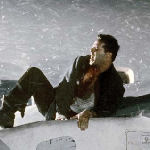 Sure, there is nothing new about a hero, in this case, perennially wrong place/wrong time policeman John McClane (Bruce Willis) battling the bad guy (William Sadler). We expect a solid fight. The fact that this entire showdown takes place on the wing of a massive 747 trying to take off in the middle of a Christmas blizzard ups the action ante significantly. As the fists fly right along with the snow flurries, we witness a bravura performance from both director (Renny Harlin) and the stuntmen/stand-ins at his disposal. 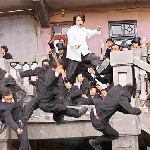 Let’s face it–martial arts movie could make up the vast majority of this list. Each one is an exquisite exercise in carefully choreographed chaos with the punches offering accents to the already violent symphony playing out over the actors. So thank you, Stephen Chow, for turning the already over the top and ludicrous into something akin to a live action cartoon. Many of the fights in this film are magical in their physical comedy conceits–and quite funny to boot. 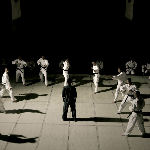 And now, for the other side of the kung fu concept. In this semi-biographical tale of the famed grandmaster and mentor to Bruce Lee, Donny Yen must take on his own issues at home as well as invading Japanese forces. One of the outstanding moments in this equally evocative film comes when our hero must stand down ten determined rivals. As an example of what modern martial arts can be, this is strong, satisfying stuff, filled the moves both balletic and ballistic. 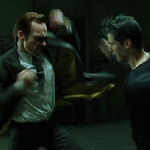 For a new generation of wushu lovers, this is the Bible. It features famed action choreographer/director Yuen Woo-ping offering some amazing wire fu. But nothing beats the stand-offs between sworn enemies Neo (Keanu Reeves), and that sun-glassed adversary of the machine world, Agent Smith (Hugo Weaving). Their mano a mano matches are epic, combining everything from guns to given items, each focusing on bettering the other in their virtual world arena — and things would only grow, exponentially, with each coming sequel, concluding with our hero battling an entire populace of rogue “programs.” 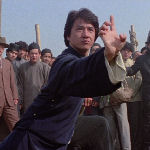 #4 – The Legend of the Drunken Master

Yes, Jackie Chan has to be here, and not just because he did all his own stunts back in the day. (Age now limits his realistic risk taking.) Here, he uses the so-called inebriated style of fighting to set things right in a turn of the century China. The plot seems like nothing more than a series of excuses to get Chan involved in numerous battles, each of which he maneuvers with a combination of wit and sweet science wisdom. Considered one of the masterworks of the genre, and the fighting confirms said status. 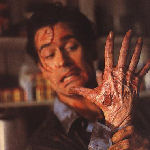 How can this not be on anyone’s list, especially when you consider that the main melee takes place between one hapless rube and his demonically possessed… hand? That’s right, Sam Raimi’s reluctant hero, Ash (perfectly embodied by Bruce Campbell) has to take on his own destructive paw as it does everything to destroy him, from Three Stooges-like slapstick to hurling plates at his head. The beatdown may end with a chainsaw amputation, but the set-piece as a whole is pure pugilistic wonderment. 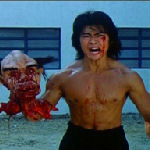 Like our first choice, this is a given. Ricky Ho Lik Wong is sent to prison for killing a drug kingpin. While incarcerated, he becomes the target of a frightening future shock bureaucracy and its representative, Warden Dan. Thus begins a nonstop (mostly) comic bloodbath which sees eyeballs dislodged from heads, intestines used as nooses, and body parts crushed like overripe grapes. In all its crazy cult insanity, it remains a thoroughly satisfying, if slightly surreal, kung fu film. 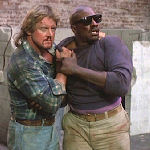 Here it is — the big bad-ass daddy of them all. It’s such a memorable moment in John Carpenter’s slick, savvy sci-fi social commentary that it’s been imitated (with gusto) by two handicapped cartoon characters as part of that equally sly satire, South Park. “Rowdy” Roddy Piper and Keith David have a disagreement over a pair of secret sunglasses. The result is a hamfisted spectacle of knuckles-to-noggin brilliance. Just when you think one or the other will “tap out,” the pummeling continues. In a movie filled with memorable elements, this fight remains a standout. It truly kicks butt.