The 10 Best Food Scenes in Film
By: Bill Gibron

Ever since Public Enemy‘s James Cagney smashed a grapefruit into Mae Clarke’s face, food has been an intricate part of film. From delicious dinner scenes to randy road trip rest stops, chow and its link to cinematic subtext has been a necessary narrative and artistic staple. Here are ten examples of how important comestibles are to a well balanced motion picture. They can be as orgasmic as what Sally was having in that diner, and they definitely beat the flavor of a five dollar shake. In fact, once sampled, you’ll be salivating for more.

#10 – Beans Around the Campfire 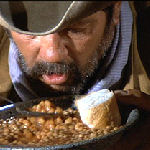 It’s hard to believe that, over 40 years ago, this roundelay of toots and musical fruits was the height of bad taste humor. Today, this collection of classic fart gags is one of the tamer elements in a film filled with hot button, lightning rod subject matter. Leave it to comedy legend Mel Brooks to make people passing gas part of an otherwise insightful social commentary/western spoof. 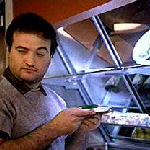 Rumor has it that star John Belushi improvised this entire sequence in one slovenly take. As director John Landis passed suggestions on from the side, the former SNL superstar stuffed his pockets — and his face — with all manner of ’50s lunch lady food fare. Add in the “zit/food fight” finale and you have vittles as a viable element of this hilarious romp. 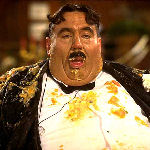 We’ve had farting — now, how about vomiting? As part of their over-the-top look at existence and man’s pathetic place within it, these British comedy gods came up with a premise so sensational that it became the movie’s cornerstone. As a morbidly obese gentleman who eats — and then regurgitates — an entire restaurant menu, Terry Jones takes voluminous projectile puking to a new level. 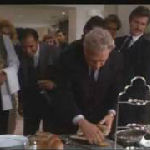 Film: Back to School

Starving, and unable to find any “real food,” Big and Tall clothing tycoon Thorton Melon (Rodney Dangerfield) decides to create his own specialty sandwich. Grabbing an entire loaf of bread and splitting it lengthwise, he scoops out the soft center and proceeds to take an entire setup of meatballs, deviled eggs, and other delectable relish tray goodies and turns them into the ultimate man food, complete with a beer. 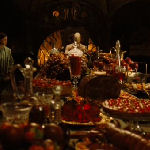 While food is merely a subtext here, its use is indeed chilling. Our heroine, little Ofelia, must retrieve an ornate dagger from a monster who feeds on her fellow wee ones. As a means of thwarting her plans, the creature lays out an elaborate table of sweets and treats that no ordinary kid could resist. When Ofelia (almost) fails, we suddenly learn why the Pale Man is the provider of such nasty nightmare fodder. 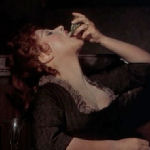 In Tony Richardson’s 1963 Oscar-winning take on Henry Fielding’s novel, there’s a sequence where our title hero runs into a woman at a country inn. Sharing a meal, it becomes more and more obvious that they are interested in much more than mere sustenance. Copied and parodied ever since, it remains a landmark of subtle (and not so subtle) sin and sensuality. 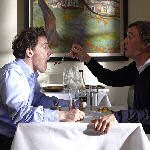 Beginning life as a TV series, the premise has comedian friends Steve Coogan and Rob Brydon taking a crazy cook’s tour of England, sampling some of the most experimental and high quality cuisine the country has to offer while mocking each other’s career and abilities with celebrity impersonations. While the voices are often spot on, the food often seems lifted from an insane man’s private cookbook. 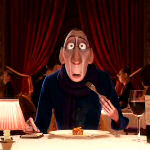 It’s the crucial moment in this animated classic, the pinnacle of the entire plot. When the otherwise dismissive food critic tastes a bite of tiny little Remy’s title treat, he is instantly swept back to a childhood where things were simply, secure… and savory. In that quick cut device, in that instant back and forth in time, we get the entire message of the movie, and it’s delectable. 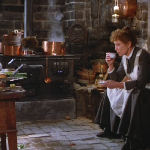 In this oft-forgotten Danish effort, the title spread becomes a symbol of one woman’s unwavering commitment and personal sacrifice. Babette is a refugee, taken in by a pair of ultra-religious sisters. When she wins the lottery, she spends the money on serving her new “family” a proper French meal. As the ingredients arrive at the small town, they become the stuff of gossip. After tasting her last act repast, they become the stuff of legend. 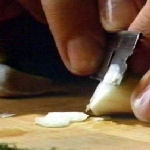 Thinly slicing the garlic with a razor blade. Adding three different kinds of meat to the sauce. An argument over the amount of onions to use as well as a discussion on dieting and “sang-whiches.” Thus we have one of the more memorable side moments in Martin Scorcese’s mob masterpiece. To this day, no one can cook a proper Italian tomato sauce without considering how this incarcerated crew makes preparations for their meal.

One thought on “The 10 Best Food Scenes in Film”