They can fuel the senses and dull the imagination. Or maybe it’s the other way around. No matter your position on them — morally or otherwise — there is no denying that drugs have become a staple of cinematic storytelling. Their use, the addiction to them, and the resulting fallout, has fueled hundreds of successful films, many moving beyond the basics to concentrate wholly on the particular and the personal. After scouring the history of the artform, we’ve decided to celebrate these ten examples of how drugs and their use are portrayed in film. While they’re all great movies, they also remind us that, sometimes, the occasional “recreational pharmaceutical” doesn’t always end in disaster. 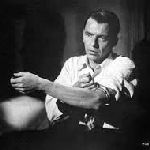 Frank Sinatra stepped way outside his comfort zone to play a recovering heroin addict in this controversial Otto Preminger film. After getting clean in prison, his character struggles in the outside world, and unlike previous depictions of the subject matter, Sinatra’s Frankie Machine was giving a more sympathetic, less psychotic dope fiend persona. Still, the MPAA thought he movie “glamorized” heroin use and it was released without certification, even if Preminger used insinuation and allusion to avoid the actual “realities” of drugs. 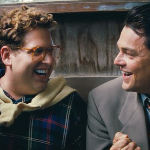 There is a moment in Martin Scorsese’s ode to overindulgence and out of control greed which perfectly sums up its characters and their attitude towards drugs. When Donnie (Jonah Hill) wants to show Jordan (Leonardo DiCaprio) how grateful he is for being part of his plans, he offers the charismatic conman some… crack. And they both LOVE IT! Thus begins an unquenchable affair with all manner of mood altering substances, with Quaaludes being their favorite. In fact, said sedative leads to another classic moment in the movie: “the cerebral palsy face.” 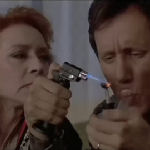 It seems like lots of actors turn to drugs — not personally, but professionally– in order to further their career concerns. James Woods didn’t need to play real estate hustler turned cokehead Lenny Brown to alter his own perception in Hollywood. In fact, the film seemed to cement everyone’s belief that he was, in real life, an out of control psycho with a small spoon constantly up his nose. While his real life issues with co-star Sean Young would continue this myth, his stunning work here helped as well. 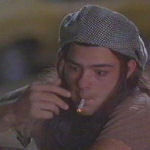 Drug use doesn’t always have to be dour and depressing. Sometimes, it can be sweet as a smell of sensimilla in the air. Richard Linklater gave everyone who was a teenager in the mid-’70s a home-rolled reminder of what it was to be young, naive, and holdin’. Along with the mandatory underage drinking, this clever coming of age comedy has more doobies and blunts than a Colorado pot co-op, all shared in a kind of communal cool which would turn weed into the adolescent “addiction” of choice. 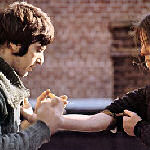 With exploitation pushing the boundaries on realism, Hollywood decided it had to follow suit. The answer was this powerful look at young junkies in New York’s Sherman Square — aka “Needle Park.” While some have called this nothing more than a Days of Wine and Roses for the counterculture, director Jerry Schatzberg strove for authenticity, even bringing real live addicts on set to shoot up on camera. The final film is a dark, disturbing take on the hopelessness of getting high. 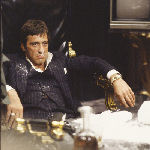 Al Pacino’s Tony Montana, a mountain of cocaine, and a plethora of quotable lines have led this film to become a kind of cult dark comedy guilty pleasure. It seems so absurd and over the top that it can only be taken as a joke, right? Well, if you lived in Florida during the ’70s and ’80s (as this critic did) you will recognize one thing — almost everything about Scarface is disturbingly realistic and authentic. Miami was indeed this kind of coke cowboy free-for-all back then.

Ryan Gosling had a major mainstream breakthrough with this indie effort about a beloved middle school teacher and coach who just so happens to be a crackhead. While he tries to keep it secret from his friends, family, and co-workers, the Jekyll and Hyde effect is has on his life is beyond troubling. The scene where the character is confronted by one of his students while he is in the gym locker room smoking remains one of the defining moments in Gosling’s career. 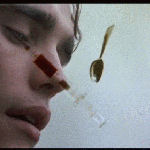 Gus Van Zant exploded onto the indie scene with this masterful movie based on the experiences of real life drug user and dealer James Fogle. As part of a pact of addicts running around the Pacific Northwest robbing pharmacies to get their fix, Matt Dillon makes us forget his early teen Tiger Beat image, instead asking us to sympathize with his “anything to get high” ideals. Once we get to the dead body in the hotel ceiling, the movie has gone from intriguing character study to disturbing inhuman horror. 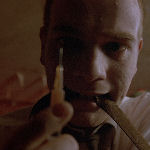 Heroin addiction as a series of hero moments. The downward spiral of drug addiction as played out within an MTV-style music video. Danny Boyle’s genre-hopping tendencies are in full effect here, with Ewan McGregor leading his band of merry junkies through a Scotland suffering through poverty, crime, and that most devastating of social stigmas — ennui. By counteracting his cast’s good-natured attitude toward dope with dark and disturbing visions, Boyle brings the truth about this terrible problem front and center. It’s horror with hilarity. 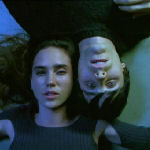 The demoralizing, dehumanizing toll drugs take on an individual hasn’t been more vividly illustrated or shockingly spelled out than in Darren Aronofsky’s brilliant adaptation of Hubert Selby Jr.’s novel. With Jared Leto, Ellen Burstyn, Jennifer Connelly, and Marlon Wayans all giving Oscar worthy performances, we fall right into the middle of a group of addicts and their ritualistic ways of surviving. The “Just say NO!” message may be married to mind-blowing directorial turns, but the end result is a nauseating, noxious warning.