The 10 Best Films About Dinosaurs
By: Bill Gibron

They’re our first fascination, their images filling our preschool and kindergarten minds with the kind of “what if” worship that only something this scientifically fanciful can produce. As time goes on, we lose our love of these prehistoric placeholders, instead finding our minds manufacturing monsters much more meaningful to our daily lives. Still, dinosaurs are a cultural lynchpin, an attraction that still holds audiences hostage no matter the medium they inhabit. For this list, tied in with the soon to be released revisit of Jurassic Park, Jurassic World, we’ve left out a certain Far Eastern idol. His 60 plus years in front of the camera requires its own collected overview. Still, even without Godzilla, the 10 films here feature enough B.C. ballyhoo to keep our inner child happy… and horrified. 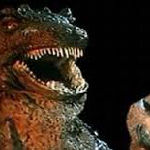 While Godzilla is not here in name, the Japanese superstar is certainly here in spirit. This uproarious UK copycat, about as goofy as attempted terror as you can get, starts off with an erupting volcano off the coast of Ireland. Before you know it, a certain Tokyo titan’s British cousin comes crawling out of the ooze and makes a bee line for London. Naturally, man tries to destroy it, and before you know it, it’s far bigger mother enters the mix, maternal instincts set to destroy. 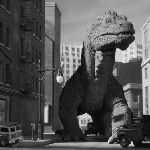 Considered one of the first monster movies that helped jumpstart the creature feature craze of the 1950s, Ray Harryhausen’s amazing stop motion effects predate Godzilla‘s man in a suit designs by a full year. The story centers on a nuclear test (naturally), a dinosaur trapped in the ice, and an eventual confrontation on the streets of Manhattan. While audiences were lukewarm on the overall film, the action sequences were considered beyond cutting edge, putting King Kong to shame according to some critics.

#8 – When Dinosaurs Ruled the Earth 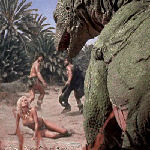 Science students know it, but Hollywood was apparently unaware of the fact that humans (or humanoid like creatures, or cavemen, whatever) never actually coexisted with dinosaurs. They actually lived several millions years apart. Still, said facts make for dull thrillers, so why not throw the two species together, and add a few scantily clad sexy women in loincloths just to up the va-va-va-voom factor. The storyline is a bunch of prehistoric hooey, the language a bunch of made-up mumbo jumbo. But the T&A? Terrific.

#7 – The Land that Time Forgot 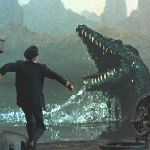 Based on the famous book by Edgar Rice Burroughs, this 1975 film stars Doug McClure as a man trapped on a German U-Boat during World War I who suddenly finds himself on an uncharted sub-continent deep beneath the ocean. There, he learns of the island’s evolutionary secret, as well as the “never trust the enemy” mandate. Rather dark and depressing — especially the ending — and sloppy in the F/X department, and yet popular enough that it warranted a sequel, 1977’s The People That Time Forgot. 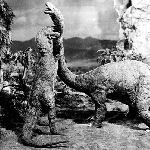 There have been several version of this 1912 novel by Sherlock Holmes’ creator Sir Arthur Conan Doyle. The best known remains the excellent silent adaptation from 1925 featuring stop motion work by Kong‘s Willis O’Brien, and Irwin Allen’s 1960 take on the material, featuring Claude Rains, Michael Rennie, and Jill St. John. As with other similarly styled efforts, it’s all about a mysterious place where dinosaurs (and other oversized critters) still roam the earth. The plotlines are pointless. It’s the monsters that make these movies. 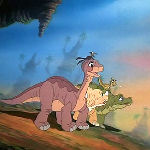 Okay, okay, it’s a cartoon — and the animation and storyline is clearly aimed at the kids. But this fascinating franchise has been responsible for an amazing 13 direct to DVD sequels, so it must be doing something right. In fact, one can easily see where the current CG success story — the Ice Age films — get their inspiration (and most of their jokes). Ex-Disney ace Don Bluth was involved with this one, so it clearly shines above the rest of the recycled merchandising. A pen and ink pleasure. 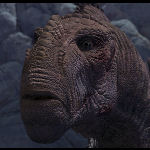 Long before Disney partnered up with Pixar to become the Kings of all Computer Generated Cartoons, it was trying to better the motherboard mavericks. So they greenlit this film about a giant lizard herd trying to survive a migratory move, and added some stunt voice casting just to make sure audiences understood what was going on. This film earns its place on the list for the impressive look and realism of the creatures. Judged on other criteria, it’s silly and stupid. 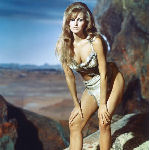 Six words — Rachel Welch in a fur bikini. That’s all you need to know about this remake (?) of the 1940 film One Million Years B.C. Again, we are dealing with dinosaurs and humans cohabitating, but the narrative is really just an excuse to see Ray Harryhausen work more of his intricate, puppetry magic, and of course, our leading lady barely dressed. It’s all a bunch of big, stupid, drive-in style fun. And to think, Ursula Andress turned down a chance to be this movie’s iconic female fixture. 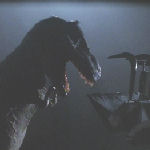 After it was announced that the number one film on our list was being fast tracked by Steven Spielberg into his next summer blockbuster, King of the B-Movies, Roger Corman, ramped up his mimic machinery and actually managed to get this movie into theaters four months before those famed CG dinos showed up. In another bit of cinematic symbiosis, both films featured members of the same family. Laura Dern in Park, and her mother, Diane Ladd, here. The end result is a clever, completely wacko pre-rip-off. 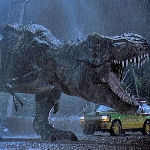 When Michael Crighton wrote his novel about scientists genetically reengineering dinosaurs as part of an island theme park, he had Steven Spielberg in mind for the inevitable film. Three years later, his desires would come to fruition and a whole new era of creature features was born. Mr. Jaws had originally wanted to use stop motion and full size mock-ups of the dinosaurs, but when he saw what the computer could create, he abandoned the idea and went with animation. The results literally changed Hollywood overnight. The movie remains a cultural milestone.