Thank You For Your Service
By: Bill Gibron

I was dragging, OK?
Buy It From Amazon
Buy It On DVD
Buy It On Blu-Ray

We stand and salute them, placing hand over heart and getting teary eyed whenever they are mentioned or the National Anthem blares across a sports stadium. But after the celebration, after the social media shout outs and viral video feels, what becomes of our veterans. Why aren’t they a priority among the populace? Why do they often become an afterthought in the ongoing battle between policy and politics?

The new film Thank You For Your Service focuses on a group of returning soldiers and the less than easy time they have adjusting to civilian life. Based on David Finkel’s non-fiction book and representing screenwriter Jason Hall’s (American Sniper) directorial debut, it follows members of the 2-16 Infantry Battalion after they return stateside from a stint in Baghdad. Trading in some of the cliches we’ve come to expect from the whole “coming home” genre, the movie excels in its close-knit characterizations. As the truisms traipse by, the personalities on display leave a lasting, damning impact.

PTSD, or post-traumatic stress disorder, hangs like a fog over everything that happens here, painting a portrait of young men and women who voluntarily wander into the valley of death out of a sense of duty and love of country. They carry their condition as a curse, the necessary evil that comes with serving in combat. Returning to a so-called normal life, they face a myriad of acclimation issues.

For Adam (Miles Teller), it’s trying to readjust to life as a married man, including a wife (Haley Bennett) and their two kids. Then there is “Solo,” otherwise known as Tausolo Aieti (Beaulah Koale), who suffers from brain damage. And then there is Will (Joe Cole), who returns to find his fiancee (Erin Darke) gone and his house empty–literally. The adjustment is not easy. Along the way, Adam is confronted by the widow of a dead GI (Amy Schumer) who wants closure, Solo ends up joining a gang of criminals, and Will decides to challenge his ex.

One of the most mesmerizing aspects of Thank You For Your Service is how it personalizes the problems facing all returning vets. From the long lines at the VA to the sense of false appreciation coming from some in the public, it’s a subtle indictment of the lack of legitimate respect we give our soldiers. Sure, pundits and politicians demand reverence, but in the real world, it’s a lack of resources, a need for ongoing mental health care, and a sense that, once we’ve acknowledged their sacrifice, we’re done that become the norm.

Yes, they are haunted by what happens. Adam replays a moment that begins the film where he saved a comrade, while Solo seems stuck in the wounded warrior mode where even a video game can set off a violent flashback. But that doesn’t mean that Hall avoids more obvious manipulations. What are we to make of a sequence where Solo saves a pitbull from a dog fighting ring? Or what about the moment when Adam is reunited with the man he saved (Scott Haze) and the standard “life changing experiences” speech gets mixed in with a healthy dose of P.M.A.

But when you think of what this movie might have been, either a mawkish hand-wringer where veterans are treated like martyrs lost in a sea of red tape and bumbling bureaucracy or a flag waving work of blatant hero-worship patriotism, what we get is far more acceptable. Granted, Hall loves his melodramatics and can’t avoid turning some of his story into a pro/con screed, but for the most part, Thank You For Your Service takes a tricky subject and sheds a very human, very humane light on it. 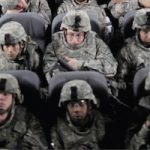 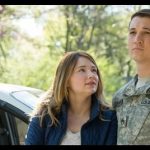 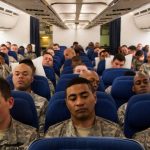