Teenage Mutant Ninja Turtles: Out of the Shadows
By: Blake Crane

Cowaboring.
Buy It From Amazon
Buy It On DVD
Buy It On Blu-Ray

About halfway through Teenage Mutant Ninja Turtles: Out of the Shadows there’s an action set piece involving a plane crash in the Amazon. The four titular, CGI-rendered humanoid heroes emerge from the wreckage, and it’s when they start fighting genetically altered baddies in the form of a rhino and a warthog for control of an interdimensional teleportation device that I began to question what the point of all of this was. After nearly two hours of wall-to-wall plotting, the movie never provides a satisfactory answer.

Part of the appeal of the Ninja Turtles since their inception in the ‘80s is the cheese factor. The silliness and distinct, playful personalities of the mutant brothers named after Italian Renaissance artists emits energy that’s easy for fans to embrace. The latest cinematic iteration of these characters, beginning with the 2014 reboot and continuing here, lacks the imaginative spark that made it all work. The mythology is way too complicated to make any sense, the scarce action all looks and feels the same, and the absurdity is compartmentalized as nostalgic fan service. Grafting these characters onto the modern blockbuster template just hasn’t worked.

The antagonist from the first film, Shredder (Brian Tee), has been imprisoned. He’s sprung from captivity by brilliant scientist Baxter Stockman (Tyler Perry). Stockman and Shredder collude to build a teleportation/wormhole device that will allow megalomaniacal alien Krang and his world-destroying ship to transport to and take over Earth. Shredder will rule by Krang’s side, while Stockman just wants the adulation from the scientific discovery. A discovery, he seems to forget, will have the minor side effect of Armageddon. It’s up to the turtles, their reporter friend April O’Neil (Megan Fox), and new pal/fellow vigilante Casey Jones (Stephen Amell) to foil the plan.

The whole global domination thing that winds up being debris from crumbling buildings falling on New Yorkers has been done to death and there’s nothing that separates Out of the Shadows from anything that’s come before, other than the arduous route it takes to get to that familiar climax. There’s a bunch of specious science, technobabble, and unnecessary side stories gumming up the works. Thankfully, we’ve got Donatello, the brains of the turtle operation, who can provide the requisite expository information or solve any logistical (read: plot) problem with the punch of a button on one of his many connected devices.

Explaining is a major issue with the unwieldy script from Josh Appelbaum and André Nemec, especially in conveying the kookiness of the fighting terrapins. The turtles are formally introduced several times, either by titles on the screen or by different supporting characters, based on a single trait. In addition to Donatello, there’s Leonardo the leader, Raphael the hot-headed brute, and Michelangelo the goofball. Their interplay almost always involves conflict over these attributes and the team dynamic is sorely lacking.

The best sequence of the film is the one in which the turtles work best together – Shredder’s escape during one of those movie prisoner transport convoys that always seem extremely vulnerable. The freeway pursuit has armored vehicles, evil ninjas on motorcycles, a helicopter, and, breaking through the clichés, the turtles giving chase in a souped-up garbage truck that shoots manhole covers out of the front grill. Director Dave Green embraces (and briefly understands) the weirdness of the turtleverse and stages some satisfactory action that utilizes the individual character quirks.

From there, however, story gets in the way and instead of subverting convention, Out of the Shadows subscribes to it. ‘80s and ‘90s favorites Bebop (Gary Anthony Williams) and Rocksteady (Stephen “Sheamus” Farrelly) – the aforementioned rhino and warthog, are clumsily shoehorned in to appease longtime fans, while Will Arnett’s character from the 2014 film carries over to appease nobody. His role could be completely excised or greatly reduced in service of pace, as could the part of an uncooperative police chief played by Laura Linney (yes, that Laura Linney). There’s so much noise that the main villain, Krang, hardly has any screen time and barely registers as a threat.

Also not felt, though it’s plainly stated several times, is the idea of the turtles being heroes that fight for the greater good without getting the recognition from a public that would reject them based on physiology.  For all the talk about it, little about that idea is explored or advanced. And, in the end, the celebratory epilogue takes place at night. In the shadows. My, how far we have to go to feel so little consequence. 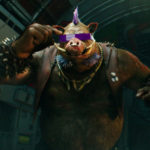 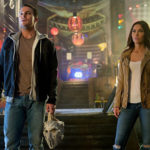 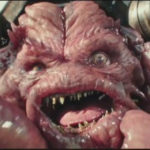