Teen Titans Go! To the Movies
By: Valerie Kalfrin

Why should Deadpool have all the fun? The animated heroes of Teen Titans Go! To the Movies might ask the same question, spurring this cheerfully irreverent adventure for the PG set that pokes fun at superhero tropes while embracing what audiences love about them.

If you’re a superhero fan—or perhaps have superhero fatigue—this deliriously funny film will at least put a smile on your face. (My eight-year-old son and I laughed out loud.)

The series cast leaps to the big screen as well. Robin (Scott Menville), Batman’s sidekick and the original Boy Wonder, is the team’s leader. Beast Boy (Greg Cipes) can shapeshift into any number of animals, all green. Cyborg (Khary Payton) is a former athlete who has super strength and robotic parts. The alien princess Starfire (Hynden Walch), who flies and manipulates energy, has an inherent sweetness and trouble with Earth syntax, making her the yang to the yin of Raven (Tara Strong), an emo half-demon who has telekinesis and can teleport.

If this is a lot to keep straight, no worries: While fighting a balloon-like villain in the opening moments, Cyborg inserts a tape of hip-hop beats for the team to introduce themselves. They get so carried away in their rhymes and grooves, the bad guy nearly escapes.

That’s par for the course for these Teen Titans, who in a previous animated incarnation (and in an upcoming live-action streaming version, Titans) are much more serious. But here, that’s all it takes for Superman (Nicolas Cage, who has long yearned to play the Man of Steel) to scold the group for being a joke.

Most of the Teen Titans shrug it off. They’d rather chill, eat (“We ‘saved’ room for dessert!” Cyborg boasts), and groove to other shenanigans set to song. (Seriously: There’s a song titled “Shenanigans.”)

Robin takes the critique to heart, although in the film’s kawaii-like animated style, feeling bummed has never looked so adorable.

He decides that they need a movie, like other stars in the DC Universe. Maybe even a nemesis.

Enter the mercenary Deathstroke, here going by his alter ego’s name, Slade (Will Arnett of The Lego Batman Movie, also a producer). The team handily confuses him for Marvel’s “Merc with a Mouth” Deadpool, given his swords and firearms. “Quick! Look at the camera and say something inappropriate,” Cyborg says.

Meanwhile, big-shot director Jade Wilson (Kristen Bell, TV’s The Good Place and Frozen) might be interested in putting Robin onscreen, if he can bear to leave his buddies behind.

Teen Titans Go! To the Movies packs super punches in its sight gags, music cues, sprightly animation, and clever twists that get plenty of mileage out of the target audience’s love of comics and superheroes—as well as poop jokes. Along for the ride are inimitable Marvel Comics creator Stan Lee, comedian Patton Oswalt (as the height-challenged Atom), talk-show host Jimmy Kimmel (as Batman), actor Wil Wheaton (The Big Bang Theory, as the Flash) and Grammy-winner Michael Bolton as a singing tiger (!). Rapper and singer Lil Yachty does double duty on both the soundtrack, remixing the team’s theme song, and voicing Green Lantern. Green Lantern had a movie, too, you know. “But … we don’t talk about that,” he says.

If this sounds like your type of escapade, take a cue from these Teen Titans and “Go!” 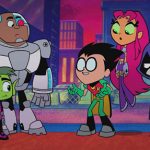 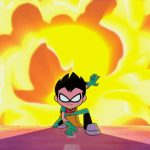 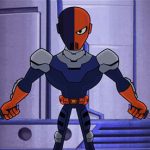