Make mine a gimlet.
Buy It From Amazon
Buy It On DVD
Buy It On Blu-Ray

It’s seems like a cinematic no-brainer. George Clooney, directing a script by his buddies in off-kilter crime, Joel and Ethan Coen, and featuring Matt Damon as a ’50s father dealing with the dark underbelly of white flight. It should be boffo. After all, Clooney and the Coens made O Brother Where Art Thou?, a collaboration that even mainstream audiences appreciated. But then you remember they worked on Intolerable Cruelty and Hail, Caesar as well, and suddenly your certainty is shaken.

In truth, Suburbicon is an uneven curiosity, the result of Clooney and his longtime writing partner Grant Heslov (Good Night and Good Luck, Ides of March) taking the story the Coens crafted and adding a little “on the nose” contemporary race baiting. Indeed, Mr. Matinee Idol gives us a subplot involving the first black family moving into a white neighborhood and tries to fuse it to what is essentially another variation on the Coens’ clever revisionist noir. Both stories deserve better, but overall, Suburbicon is oddly entertaining.

We meet the Myers–William (Leith M. Burke) and Daisy (Karimah Westbrook) and their boy Andy (Tony Epinosa)–as they move in to their new home. They are not welcome. Even the mailman responds with angry despair when he learns of their existence. The neighborhood decides that the best way to deal with this new reality is to drive the Myers out. Cue the uncomfortable racial taunts, the personal intimidation, the town meeting, and, in the end, the obligatory violence.

Next door, the milquetoast Lodges–Gardner (Matt Damon), Rose (Juliann Moore), and their impressionable son Nicky (Noah Jupe)–are dealing with their own personal maelstrom. A couple of goons (Glenn Fleshler and Alex Hassell) break into their house looking to get a debt repaid, and in the resulting chaos, someone winds up dead. As our little child tries to comprehend what is happening, Rose’s identical sister Margaret (Moore again) steps in to take her place? You start to understand what is happening once an insurance adjuster (Oscar Isaac) shows up and starts nosing around.

Even with the story being told from Nicky’s POV, Suburbicon doesn’t know what it wants to be. David Lynch made the ultimate “evil in the suburbs” statement with his brilliant Blue Velvet, and there is a lot to be said for reminding the nation of how intolerant it was (and still is, for the most part) back in the “great” days of the U.S.’s past. But Suburbicon can’t decide where it wants to go and how it wants to get there. What, exactly, are we to make of the aforementioned town hall meeting where all kinds of bigoted vitriol flows from the mouths of these privileged people?

Apparently, Clooney wants to show how sick and twisted the supposedly sublime suburbs can be. Duh! An entire genre of exploitation films followed the key party culture which saw your supposedly clean cut buddies bonking each other’s spouses in an attempt to break free from the white collar corral of a post-WWII existence. By now, the concept has become a cliche. But Clooney acts like he’s exposing us to something brand spanking new, or at the very least, something our ADD-addled 2017 brains have long since forgotten about. It’s like a lecture being delivered by a millennial. The insights are overwrought and obvious.

Had Clooney decided against augmenting his buddies’ ideas and simply updated Double Indemnity to a clean-cut 1950s setting, Suburbicon might have been a unique darkly comic take on the genre. Instead, by adding race into the mix, the movie morphs into a sloppy social commentary which says more about the people who made it than the individuals up on the screen. 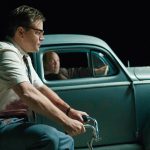 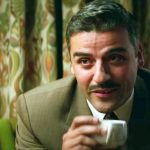 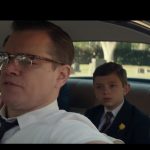