A Strange Brand of Happy
By: Mike McGranaghan

One of the most interesting cinematic trends of the past few years has been the advancement of the “faith film.” Movies aimed at Christian audiences have moved out of church basements and into mainstream multiplexes, where they play alongside the latest Hollywood blockbusters. To date, though, none have found much success outside their target demographics. This is because there is a distressing assumption among most makers of faith films that the message is more important than the craft. This usually leads to disappointment among those of us who are receptive to that message but also care about competent storytelling. A Strange Brand of Happy is the latest faith film to make a bid for box office success. It is also a prime example of how Christian audiences are expected to swallow subpar entertainment.

David Weathersby (Joe Boyd) is the requisite lost sheep. Recently fired from his job, he sinks into a depression. We know this because he sits on his couch drinking coffee a lot. His also-requisite goofball roommate, Ben (Benjamin Keller), arranges for him to work with a life coach named Joyce (Rebecca St. James) as a means of breaking out of the funk. Joyce recommends that David volunteer at a nursing home and attend a Christian slam poetry reading. He returns the favor by inviting her to shoot paintballs at a suit of armor he owns. The two begin to fall for each other; however, Joyce also has another suitor, who just happens to be David’s former boss. (Bonus points if you guessed the guy is a smug, self-satisfied jerk.) Seeking guidance from an elderly resident of the nursing home (Shirley Jones), David eventually realizes that he needs to turn to a higher power to sort his dilemma out.

The problems with A Strange Brand of Happy range from the minor to the significant. In the shallow end of the pool, the story really doesn’t make a lot of sense. David’s life is hardly terrible, and his unhappiness makes him seem like little more than a self-absorbed whiner. (The bland performance from Joe Boyd doesn’t help that.) Most people, if they got fired from a job they hated, would go find a job they like a little more. This option somehow never seems to occur to him. Also, aside from the very beautiful Joyce, David is romantically desired by his neighbor/landlord, Terry (Bekka Prewitt), who is very beautiful as well, although the film plays her off like she’s some sort of hideous troll. In spite of these things, we are asked to believe that David’s life is a complete mess that is causing him to be miserable. Just imagine how bummed out he would be if his problems were more serious than having two gorgeous women vying for his attention!

A far more serious consideration is that the movie is completely, utterly lacking in the basics of dramatization. This may be the most inept film ever made about a guy trying to save his soul. The characters are one-dimensional, with little to make us empathize with them. The dialogue tries so hard to sound “normal” that it’s devoid of interesting content. There is no actual construction of jokes. Characters simply say odd things, hoping they will elicit laughs. (“Why do you think Joyce likes you?” “We both like bacon.”) Scenes begin and end awkwardly. Self-consciously cutesy animated segments are used to transition from one scene to another when director Brad Wise doesn’t know how to get it done any other way. A Strange Brand of Happy plays like the deleted scenes on its own DVD. Everything feels like the trivial stuff that normally gets left on the cutting room floor. As an especially egregious example of its lack of drama, consider that the big resolution involves — you’d better sit down for this — a presentation with an overhead projector!

Snarkiness aside, faith films can potentially fill an important role in cinema, which thrives on diverse voices and distinct ideas. For them to truly break through, they will need to avoid the storytelling laziness that A Strange Brand of Happy exemplifies. Yes, there is a very sweet and inspirational message at the end. Too bad you have to slog through 90 minutes of incompetent filmmaking to get to it. 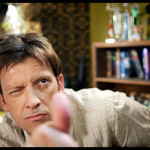 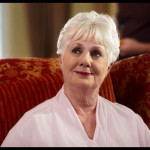 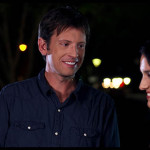 One thought on “A Strange Brand of Happy”