Did they mention the attitude?
Buy It From Amazon
Buy It On DVD
Buy It On Blu-Ray

The history of rap can be written in two specific ways — B.NWA and A.NWA. Before the celebrated Compton hip-hop act became part of the cultural conversation, the musical subgenre was constantly dissed as a fad with a limited (read: urban minority) appeal. Even with RUN-DMC teaming up with Aerosmith to legitimize their sonic output and the Beastie Boys convincing every ’80s frat boy that they had the right to party (and to fight for it), Eazy-E, Dr. Dre, Ice Cube, MC Ren, and DJ Yella were the ones that created the true lasting impact.

Rap today — “after” — owes a massive debt of gratitude to these groundbreaking individuals. That there hasn’t been a biopic before speaks to the complexity of their creation, and the equally multifaceted way they were met by the public and society at large. Now, F. Gary Gray (who was there to help Cube when he went solo, as a video director) has teamed up with the surviving members to provide an appropriate elegy to NWA’s influence and import. Straight Outta Compton is not just one of the best movies about the music business ever made, but it’s the drama about racism that a modern audience needs now more than ever.

Everyone knows the rags to riches part of the myth. Low level drug runner Eazy E (Jason Mitchell) is hit up by his neighborhood buddies Dr. Dre (Corey Hawkins) and Ice Cube (O’Shea Jackson, Jr.) to funnel some of his unlaundered cash into a record label. Entitled Ruthless, the first track — “Boyz in the Hood” — is a massive local hit, drawing the attention of old school music biz boss Jerry Heller (Paul Giamatti). With MC Ren (Aldis Hodge) and DJ Yella (Neil Brown, Jr.) fleshing out the fivesome, the group goes on to introduce “gangsta” rap to Middle America, frighten the establishment, and make a mint, before egos and bad business deals send Cube, and then Dre, packing.

What Straight Outta Compton showcases even more defiantly is the out of control nature of the L.A.P.D. circa the ’80s. Rodney King is referenced, as are the riots. Because of ongoing gang violence throughout the city, the police began unwarranted crackdowns of otherwise law abiding black males. Throughout the film, before it turns into a more star struck storyline, we are witness to numerous instances of police brutality that are often hard to stomach. They are so shocking in their senselessness and demanding of retribution that when the group tours Detroit, and is warned by a collection of cops that playing their seminal song “F*ck Tha Police” won’t fly, the concert sequence builds to a perfect moment of free speech spontaneity.

Music does play a major role in the retelling of NWA’s rise and rapid fall. Dre is clearly the architect of their signature sound, a part he would also play in the rise of Death Row and the stardom of Tupac (Marcc Rose) and Snoop Dogg (Keith Stanfield). Yes, Suge Knight (R. Marcus Taylor) is here, portrayed as the violent side of Heller’s industry leech. They both want the same thing — to ride the coattails of this amazing commercial phenomenon being born right in their backyard and make sure that their “artists” get little reward in return. Indeed, aside from the shocking racism shown by the L.A.P.D., the fact that this band got so little after creating so much is another offense.

Eventually, the death of Eazy E casts a pall over the proceedings that saps away some of the energy. Still, like the socio-political commentary on display, the casting is on point, creating an almost documentary feel to some of the film. Straight Outta Compton may be filtered through the collective desire of Dre, Cube, and E’s widow Tomica Woods-Wright (they are all producers here as well) to keep things about the music, not the misogyny they often showed, but even with some obvious gaps, this movie means something. That it’s as entertaining as the creative output from the individuals featured is a given. That it symbolizes a still ongoing struggle makes it one of this summer’s special treats as well. 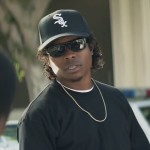 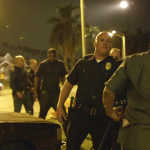 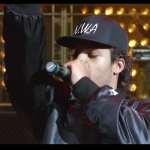 One thought on “Straight Outta Compton”