Time for some head shrinking!
Buy It From Amazon
Buy It On DVD
Buy It On Blu-Ray

Director Brad Anderson began his career making bold, ambitious films like Next Stop Wonderland, Session 9, and The Machinist (a picture many people feel is a modern classic). Recent years, though, have found him making more conventional mainstream fare like The Call. His newest effort, Stonehearst Asylum, falls into the latter category, but that’s not necessarily a bad thing, because it generally works. Based on an Edgar Allen Poe story, the film gets credit for tackling some unusual subject matter, even if it never fully maximizes that material’s potential.

Set in 1899, Stonehearst Asylum is the story of Edward Newgate (Jim Sturgess), a recent medical school graduate who accepts a position at the titular mental institution. There, he is coached in the art of caring for the “mad” by Silas Lamb (Ben Kingsley), the facility’s director. Lamb’s techniques don’t always gel with what Newgate learned in school, which leads to some uncomfortable questioning of his methods. Things become a little more clear when Newgate makes his way down to the basement and discovers that the real administrator, Dr. Salt (Michael Caine), and his staff are all being held captive. Lamb and the others are actually patients who have revolted. The inmates are literally running the asylum. Newgate believes that he can rescue everyone, provided he first earns Lamb’s trust. This means pretending to be okay with the man’s methods and, more disturbingly, potentially becoming complicit in them. He takes the chance, in part because he’s become smitten with a female patient, Eliza Graves (Kate Beckinsale), he believes has been falsely admitted to Stonehearst.

Stonehearst Asylum offers up a few really engaging conundrums. On one hand, Lamb is holding people hostage and has a violent background. On the other hand, the patients seem to thrive under his “treatments,” perhaps because he understands what they really need. Salt, meanwhile, is the actual doctor, but Newgate can see that the techniques he used were Draconian and left people miserable, half-comatose, or both. Mental health treatment has a long history of shocking, horrific methods that frequently did more harm than good. They came from doctors having only a basic, insufficient understanding of what caused these disorders and essentially guessing as to what might cure them. Stonehearst Asylum doesn’t fully explore the impact of such scientific inadequacy, but it certainly does use it to create tension and compelling drama. Anderson and screenwriter Joe Gangemi keep you wavering on which man is really the more humane healer, and wondering which way Newgate’s allegiance will swing.

There is also a really unsettling atmosphere to the film. Watching characters undergo primitive forms of shock treatment and other awful-looking procedures emphasizes how (thankfully) far mental health treatment has come. More than that, Stonehearst Asylum takes care in conveying that suffering from a serious mental health disorder is its own form of hell, one that can turn people into someone or something they’re not. It’s often gripping to watch Newgate attempt to look deeper into the psyches of the patients he encounters. One especially thrilling scene finds him facing down an angry, physically aggressive guy known as the Ogre and using his intellect to survive. A similar thing happens in his interactions with Lamb. Newgate really believes that the key to saving everyone is to heal the man who led the revolt, so he’s continually looking for clues that will unlock Lamb’s mind.

This kind of psychological process is very well portrayed in the movie, providing a strong hook that carries you over a few fairly substantial flaws. The biggest of them is that the Eliza Graves character is seriously underdeveloped. She is in Stonehearst for plucking her allegedly abusive husband’s eye out and biting his ear. The film could — and should — have engaged in much more provocation as to whether or not she deserves to be there. Also, Eliza is ostensibly the catalyst for Newgate’s actions, so her relative sketchiness detracts from our identification with his determination to save her. (As usual, Hollywood is more interested in the male characters than the female ones.) Another issue is that, given the seriousness of the psychoses and behaviors displayed by some of the key figures, a few things are wrapped up a little too neatly and tidily. Very grave problems resolve themselves quickly so that the plot can reach a resolution that leaves no loose ends untied. Given the intense subject matter, loose ends would actually be more authentic.

Notable as those issues are, they don’t totally detract from the many elements that work. Stonehearst Asylum is very well acted by an ace cast and atmospherically photographed by cinematographer Tom Yatsko. It also interestingly weaves mental health problems and their treatments into its mystery plot. There’s probably a brilliant, award-worthy film to be made about the inhumane way the medical practice dealt with the mentally ill in the past. This one isn’t it, but it is nonetheless a solid, sturdy piece of entertainment. 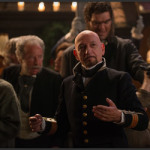 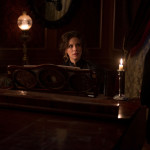 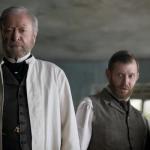 One thought on “Stonehearst Asylum”