All the cool kids are dressing up like Robert Smith for Halloween.
Buy It From Amazon
Buy It On DVD
Buy It On Blu-Ray

It’d probably be impossible to produce a suspenseful, sensual coming-of-age thriller about the relationship forged between an impressionable, inquisitive teenage girl and her mysterious Uncle Charlie without blatantly calling to mind Alfred Hitchcock’s masterful, somehow-underrated Shadow of a Doubt.

So instead of dodging the comparisons, South Korean director Park Chan-wook (Oldboy, The Vengeance Trilogy) embraces the similarities and figures out how to make them his own. The result, Stoker, is a devious but delicious little puzzle that manages to be the first unquestionably outstanding film of 2013.

Though Chan-wook’s a self-proclaimed Hitchcock disciple – citing Vertigo as the feature film that inspired him to ditch his art-critic aspirations and direct deranged thrillers – he understands that every affecting Hitch homage needs just enough De Palma to keep things on edge. By lifting bits and pieces from both influential directors, Chan-wook ensures that his English-language debut delivers an impressive concoction of sexual tension and murderous suspense.

It’s as volatile a cocktail as you’d hope, though not exactly what you would expect from a movie about a teenage girl dealing with the unexpected death of her father. We first meet India Stoker (Mia Wasikowska) in the days following the mysterious demise of her dear old dad, Richard (played, in flashback, by Dermot Mulroney). India and her frigid, distant mother, Evelyn (Nicole Kidman), aren’t emotionally close, yet they go through the motions of a conventional family as they attempt to host Richard’s estranged brother, Charlie… who has an uncomfortable interest in both women for different reasons. 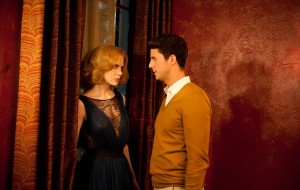 Stoker was penned by actor Wentworth Miller, who before this was best known for his starring role on the Fox television program, Prison Break. That’s about to change. The budding screenwriter weaves numerous hints toward the presence of a predator into his dry, verbal intercourses, all of which drip with the deliberate suggestion of sexual chemistry. It’s no accident that scenes of liberating sexual freedom occur after characters play on playgrounds in the dead of night, or that pencils – tools of knowledge – turn into weapons when deviant sex accusations are hurled at our protagonists.

In fact, the whole of Stoker is an intricate puzzle with several small locks that can be turned the more the film is analyzed. It’s no coincidence that India receives a key from her deceased father as a birthday present. Besides the visual clue of a fragile egg, the key is the most literate symbol in Stoker, and its importance grows as the movie unfolds.

Because Chan-wook understands that 50 percent of a movie can (and should) be told through calculated artistic imagery, though, Stoker also can be appreciated simply for its stunning cinematography and poignant, well-planned – and deftly executed – camera work. Chan-wook creates such a visual feast, it’s easy to overlook the subtle performances by the dialed-in cast. But that would be a mistake, for Wasikowska and Goode dance an icy pas de deux as hunter and prey (whose roles interchange at regular intervals), and Kidman meets the challenges in Wentworth’s script by fleshing out a complicated role and giving it depth and compassion.

Provocative, sexy, morbid, artistic and, yes, Hitchcockian, Stoker is appointment cinema, the first such effort of this still-developing cinematic year. Scoop yourself a bowl of ice cream from India’s “basement,” Charlie’s favorite place to dwell, and enjoy.

The Blu-ray includes deleted scenes and some making-of footage.