Ain't no wonderland.
Buy It From Amazon
Buy It On DVD
Buy It On Blu-Ray

The thought of having your mind and memories stripped away or watching a loved one transform into a shell of themselves is horrific on several levels. As a subject for cinematic drama that plays on those fears, Alzheimer’s could easily be fodder for stark sentimentality or extraordinary tragedy. Still Alice avoids both of those pitfalls, and while it’s understated to the point of feeling occasionally cold yet sidesteps much of the potential discomfort, the film is anchored by a remarkable performance from Julianne Moore that’s engrossing and powerful in its restraint.

The warning signs start small but quickly escalate for Columbia University linguistics professor Alice Howland (Moore). She trips up while giving a presentation, but recovers with a joke. She gets disoriented while jogging and introduces herself multiple times to her son’s new girlfriend. Worried, she consults with a neurologist who diagnoses her with early-onset Alzheimer’s. Her disease is familial, meaning her three grown children – lawyer Anna (Kate Bosworth), med student Tom (Hunter Parrish), and aspiring actress Lydia (Kristen Stewart) – have a 50/50 chance of having it passed on to them. As her family deals with her deterioration, Alice attempts to take as much control of her present and future as possible.

In adapting Lisa Genova’s 2007 best seller, writer/directors Richard Glatzer and Wash Westmoreland take a measured approach to the material that is surely informed by their personal experiences. The filmmakers are married in real life and Glatzer is living with ALS, so there’s real perspective that honestly grounds the film. They’re not too interested in the dramatic high points that mark the stages of disease, but prefer to put us in Alice’s headspace. The POV is a bit artificial early on, with the camera following directly behind Moore, but it’s still effective. Some clever choices with timelines and editing that help us identify with the character work better.

A standout scene has the neurologist’s off-screen voice peppering Alice with probing questions. Moore’s tone and subtle mannerisms make her answers feel wholly extemporaneous and we can’t help but become invested in the process from the beginning. Especially when presented with a memory quiz involving a man’s name and address – I remembered the name, but needed the multiple choice options to recall the street. The approach gets a tad clinical with discussions of PET scans and beta amyloids that sound as if they’re read from a brochure by Alice, her neurologist, and Alice’s doctor husband John (Alec Baldwin) – three smart people who can converse rapid fire on the issue. There are some interesting nuggets of wisdom, including the fact that intelligent people go undiagnosed for a time because they develop workarounds to manage the disease.

With the focus on Moore, supporting players mostly fade into the background and are relegated to reactionary roles. Many of the emotional beats are confined to single scenes that zap their impact. It’s convenient that Alice has three children when there are three potential outcomes for a test that reveals if they’ve inherited her disease – having it, not having it, or not wanting to know. This information is passed on in a phone call and never explored further. Baldwin is even-keeled as John, always supportive of Alice but never coming off as empathetic, having one minor breakdown that rings a little hollow. Only Stewart is given some meaningful interactions with Moore and the actresses always make it work – even over Skype.

Moore has never been better and completely disappears into a character that is marked by an evaporation of her mental faculties, but not totally defined by it. There are defining moments – a triumphant speech at the Alzheimer’s Association, a failed attempt by a depleted Alice to follow grim instructions left by her former self – but, to the credit of Glatzer and Westmoreland, they allow character to tell the story rather than plot. To (and through) the end, this is an emotional struggle that can’t have a completely clean resolution, and Still Alice doesn’t try to force one. 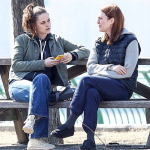 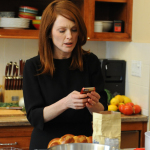 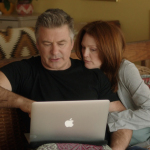 One thought on “Still Alice”