Steve Jobs: The Man in the Machine
By: Norm Schrager

You probably don’t need to see another movie about Steve Jobs to understand the guy was, in all likelihood, a tremendous prick. His ability to influence, even bully, regardless of the emotional outcome, is now part of the well-known Jobs mystique, the ugly yin to Jobs’ creative yang. We’ve already seen eyewitness testimony of the Apple co-founder’s methods in Robert X. Cringely’s excellent 1996 series Triumph of the Nerds, in which former employees assure us that Jobs’ moral compass leaned toward a steady direction of “screw you” to get what he wanted.

Yet, the entrepreneur is revered in global culture, and that’s what Alex Gibney attempts to reconcile in The Man in the Machine. Gibney, creator of tight, enthralling documentaries – his Scientology opus, Going Clear, is a repeat-viewing must – gives us, frankly, too much Jobs. In his quest to tap into the collective psyche (hey, just like his subject did), Gibney rehashes what is likely known to many, and creates a long, inconsistent story that lacks its own magnetic north.

What’s immediately striking about The Man in the Machine is Gibney’s use of voiceover in the introduction, the director expressing his own curiosity over the mass mourning that followed Jobs’ death. But who is this voice wondering about the death of an iconoclast, and why should I care? Does Gibney assume the audience (largely on CNN for this one, by the way) knows who he is? Doubtful. A speck of setup to clear that up could go a long way to grabbing interest.

In trying to unravel the tightly wound Mythology of Jobs, Gibney gives us the man’s early days, his relationship with teen buddy and Apple partner Steve Wozniak, the stuff you’ve seen before. We also get episodes of Jobs’ idiosyncratic behavior, his thinly veiled lust for power, his ability to mentally push and shove others. As with Cringley’s documentary, the interviews with Apple staffers are the highlights – Gibney is damned great at framing up a dramatic soundbite here, just as he is in Going Clear.

Playing somewhat chronologically – predictable, but useful – Gibney discovers two of his more revealing interviews with ex-Apple leaders, and uses them well. One is an iPhone developer who describes Jobs’ incredible adeptness at chiding, welcoming or ignoring an employee – and knowing exactly when each reaction would be most effective. Gibney humorously complements this observation with three photos of Jobs in various moods.

The other Apple staffer is Bob Belleville, a soft-spoken developer and Jobs confidante from the early Macintosh days, who’s so emotionally overwhelmed by the interview’s end he can barely speak. It seems that his relationship with Jobs both ruined his life and enriched it immeasurably.

This fascinating dichotomy should be the film’s anchor, but Gibney doesn’t take full, focused advantage, instead turning the final chapter of The Man in the Machine into something of an investigative crime report. It’s a style Gibney executed particularly well in Enron: The Smartest Guys in the Room, but it’s out of place here. By the time the loose ends give way to some final commentary, Gibney has gone overboard, waxing on about his own obsession with the iPhone and showing us how a powered-down iPhone reflects your vision back at you. Hoo boy. Trust me, one big ego’s enough for this movie. 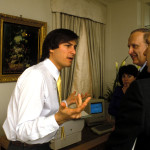 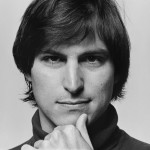 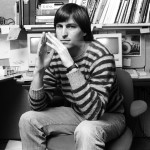 One thought on “Steve Jobs: The Man in the Machine”