Ka-boo!-ki
Buy It From Amazon
Buy It On DVD
Buy It On Blu-Ray

The idea of a horror musical hybrid seems preposterous to say the least. Imagine camp counselors bursting into song while being pursued by Jason Voorhees, or a killer stalking the halls of whatever the high school is called in Glee. But, this seemingly incongruous genre mixture has worked before. From the enduring camp of The Rocky Horror Picture Show to the rollicking satire of Phantom of the Paradise, there’s interesting and entertaining ground to cover. Using Phantom (among several other De Palma works) as inspiration, Jerome Sable’s Stage Fright attempts to inject traditional slasher tropes into musical theatrics, with middling results. After a strong opening, the combination becomes a mishmash of borrowed parts rather than sly deconstruction.

Budding stage star Kylie Swanson (Minnie Driver) is brutally murdered after a breakthrough performance in the musical The Haunting of the Opera. Fast forward ten years and Kylie’s now-teenage kids, Camilla (Allie MacDonald) and Buddy (Douglas Smith), are kitchen workers at the Center Stage performance arts camp. The financially strapped camp is run by Kylie’s former producer Roger (Meat Loaf), who schemes to stage a revival of Haunting of the Opera to attract the attention of a Broadway producer. Camilla auditions for the lead role, fighting snobbish rival Liz (Melanie Leishman) for the part while fending off the sexual advances of skeevy director Artie (Brandon Uranowitz). As Camilla and the rest of the campers prepare for opening night, a killer commandeers the kabuki mask of the show’s villain and goes on a vicious rampage to bring the revival to a bloody end.

The idea of Phantom of the Paradise by way of Sleepaway Camp offers all kinds of exciting possibilities, but Stage Fright doesn’t realize any of them. The bloodletting never congeals with the musical numbers, the episodic nature of each only calling attention to the mismatched genres. The best musical performance comes during the opening credits and the killing spree starts very late, leaving the middle of Stage Fright adrift.

Way too much time is devoted to the toothless drama between Camilla and her director, an unimportant Scream-ish whodunit narrative that establishes suspects, plus a collection of hollow references to other films. The only reason to position a bucket of red paint above the stage is to remind us of Carrie. A costume designer’s mannequin head is impaled to resemble Pinhead from Hellraiser, and a young prop maker holds a saw above his head and does a Leatherface dance. There’s so much posturing during the drama that even the non-obvious winks feel like cheap pandering. The choice to blare a heavy metal riff whenever the killer appears doesn’t work at all.

There are flashes of exuberance – as in the opening number – but routine gets in the way of giddy mayhem. Instead of focusing on the gore and the playful music, we get inconsequential plotting and a series of red herrings that distract from the singing and the slashing. Sable’s caught in the middle of two sets of conventions and doesn’t follow through with either, making for a lukewarm mesh. Stage Fright doesn’t strive for anything deep, nor should it, but it also doesn’t wholly indulge in the surface-level antics. A film with this title and this plot description should be frivolous, but it should also be fun. 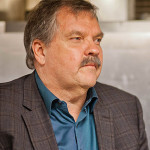 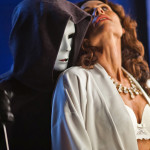 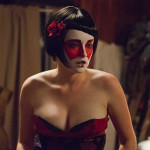