Wanna be in the all female Ghostbusters?
Buy It From Amazon
Buy It On DVD
Buy It On Blu-Ray

It’s such an overused cinematic cliche that it almost demands its own subgenre. Call it the “Grumpy Old Man/Awkward Youngster Bonding” comedy/drama. You know the kind: cranky curmudgeon with a weary worldview that hides an actual heart of gold, a frail (and frequently bullied) exceptional child who needs guidance from someone other than their overworked (and often overbearing) parent, a slew of comic vices (gambling, smoking, drinking, carousing), and just enough message to make the experience seem deep. There you go. You’ve got St. Vincent. Bill Murray was moved by the sitcom-level claptrap offered by writer/director Theodore Melfi, and, depending on how much you love the aging icon, you might be as well.

Just don’t come looking for anything original or unique and you may walk away happy. That’s because Murray’s Vincent embodies every truism of this kind of movie malarkey. Our harried anti-hero only takes on the task of caring for little Oliver Bronstein (Jaeden Lieberher) because his mother, Maggie (Melissa McCarthy), is willing to pay for the privilege. Vincent needs the money as he’s in deep to his bookie (Terrence Howard) and has a pregnant Russian stripper/prostitute gal pal (Naomi Watts) who depends on him. As time goes by, Oliver learns to love Vincent, and visa versa… well, kind of. Some awkward plotting gets in the way, eager to tug on your heart strings but not potent enough to buff away the patina of preposterousness.

For selected scenes, in moments when we get lost in what Murray is doing as an actor, St. Vincent succeeds. Again, any other performer might have tilted the material one way (bad) or the other (awesome), but the mythic madman walks right down the middle, doing the material a grand service which, sometimes, leaves the audience out of the loop. Melfi’s script, one of those oft-mentioned members of the famed Hollywood Blacklist of great unproduced movies, really struggles to prove its reputation. Unless things read better on paper than they appear on screen, he hasn’t created anything new or novel, just invested a by-now tired ideal with a couple of clever lines.

Luckily, at least half the supporting cast is up to the challenge of going toe-to-toe with Murray. For once, Ms. McCarthy isn’t spouting sexual euphemisms or bullying people. Instead, her single mother is complicated and compelling. There’s a hint of her typical female ferocity here, but not enough to undermine the more subtle, serious undertones. As for young Jaeden Lieberher, he’s a perfect foil for Murray. His body language may betray his age, but his attitude blends well with Vincent’s various “get off my lawn” lamentations.

On the other side of the character map, Watts is saddled with an accent that makes Walter Koening look and sound like Vladimir Putin, and Howard is more or less wasted in a mere shadow of a role. And then there’s Melfi the director, lacking any real visual flair or sense of narrative drive. St. Vincent often plays like a series of vignettes strung together — very loosely — by the initial goal of getting our lead out of hot water while teaching his naive charge a few of the lessons from the school of hard knocks. There’s no bigger purpose, no bigger picture to envision outside of watching a cloying character study that relies too heavily on formula and forced emotion.

With St. Vincent, the litmus test is named Bill Murray. Love him, and you’ll enjoy this otherwise average entertainment. But if you want him to do more than just be grouchy and glib, or the movie about him to be something more than an Uncle Buck redux, then get ready to be disappointed. A true filmmaker like Wes Anderson can make this material work with his undeniable quirk. St. Vincent could use a big helping of his eccentricity. 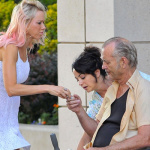 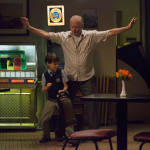 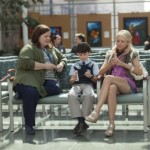