The SpongeBob Movie: Sponge Out of Water
By: Bill Gibron

Take that, American Sniper!
Buy It From Amazon
Buy It On DVD
Buy It On Blu-Ray

It’s hard to believe that the delightfully demented character SpongeBob SquarePants has been around for nearly 16 years. Way back in 1999, creator Stephen Hillenburg was regrouping after the cancellation of his equally enjoyable Rocko’s Modern Life and was interested in pitching a new show about a “SpongeBoy” and his buddies. One name change later and you’ve got one of the most beloved and enduring animated series on TV. Since the success of 2004’s The SpongeBob SquarePants Movie, the suits have been eager for a sequel. The SpongeBob Movie: Sponge Out of Water should fit their family film need quite nicely.

Be forewarned, however. All that live action CG stuff you see in the trailers happens late in the last act. Very late. The main part of the narrative occurs in everyone’s favorite underwater locale, Bikini Bottom. When an evil pirate named Burger Beard (Antonio Banderas, chewing the scenery “with relish”) finds a magical book, he wants to harness its inherent power. Unfortunately, in order to do that, he must find the last page… which turns out to be the famed recipe for Mr. Krab’s (voiced by Clancy Brown) celebrated Krabby Patties.

As usual, Plankton (Mr. Lawrence) is also trying to get his “hands” on the trade secret, but SpongeBob (Tom Kenny) and his starfish pal Patrick (Bill Fagerbakke) keep getting in the way. When the critical piece of paper disappears, Bikini Bottom is sent into a panic, and it’s up to our gang, including Squidward (Rodger Bumpass) and squirrel Shirley (Carolyn Lawrence) to travel to our reality to retrieve it… and battle Burger Beard.

You don’t have to be a fan of the TV series to enjoy The SpongeBob Movie: Sponge Out of Water. There are enough jokes that go over the head of the average grade schooler that parents won’t mind spending some quality time with these characters. The voice work is wonderful, the cast’s familiarity with the characters really selling the silliness. Even the use of incredibly bad puns is pardonable (as are the wonderful references to The Road Warrior in a post-Krabby Patty apocalypse Bikini Bottom).

On the other hand, this isn’t The Lego Movie. SpongeBob is aimed squarely at the “still believe in Santa” set, and directors Paul Tibbitt (animation) and Mike Mitchell (live action) never waver from that fact. Even when we get to the finale and our now-3D heroes are hulked up like supermen, the nods to our contemporary fixation with comic books are minor at best. What could have been a sly satire is, instead, a wholly satisfying and acceptable electronic babysitter. Lots of bright colors and funny shapes to keep small brains buzzing.

Yes, as a movie made for the class of 2029, there’s an unrelenting hyperactivity that can grow tiring at times. We just want everything to stop for a moment to let the ideas sink in. After all, when we go back in time to prehistoric days, it would be nice to learn more about what, exactly, is a Squidwardsaurus Rex, and a trip inside SpongeBob’s brain deserves an equally languid attention span. By the end, we’re exhausted, especially when our pumped up sea creatures start kicking butt. The action is well staged and engaging, but also over the top and tiring.

As Paddington proved a few weeks ago, a truly terrific family film can maintain a balance between slapstick and sentimentality (and the surreal and the silly) with ease. All it has to do is take the time to make sure each of these elements is treated with the same amount of creativity and care. The SpongeBob Movie: Sponge Out of Water clearly enjoys the times when it can push the boundaries of its 15 year old idea and bring a new perspective to the participants and their problems. On the other hand, the need to cater to a determined demo means that some of the fun and all of the subtlety is lost. 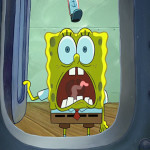 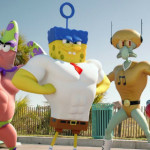 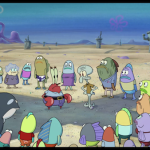