Spider-Man: Into the Spider-Verse
By: Valerie Kalfrin

Spideys, assemble!
Buy It From Amazon
Buy It On DVD
Buy It On Blu-Ray

The visually inventive animated adventure Spider-Man: Into the Spider-Verse pops off the screen like a comic book come to life. Rectangular panels spell out characters’ thoughts. Action and scenery pulse with neon colors, ink splatters, even Ben-Day dots.

But this joyous concoction isn’t just a fanciful lark. It reaches into multiple dimensions, shows there’s more to heroics than superpowers and a mask, and introduces endearing characters such as Miles Morales, a biracial teen and talented graffiti artist.

Miles first appeared in Marvel Comics in 2011, inspired both by then-President Barack Obama and rapper and actor Donald Glover (Community, Atlanta). He appeared in Disney XD’s Ultimate Spider-Man, but Spider-Man: Into the Spider-Verse is his big-screen debut.

When the film begins, Miles (Shameik Moore, Dope) is off to a Brooklyn boarding school where his dad (Bryan Tyree Henry, Atlanta), a police officer, and mom (Luna Lauren Velez, How to Get Away with Murder), a nurse, hope he’ll find an academic challenge. He’d rather visit his uncle Aaron (Oscar-winner Mahershala Ali, Green Book), an ex-con who encourages his artistic side.

Aaron takes Miles into the subway tunnels to paint, where a radioactive spider soon takes a bite. Spider-Man: Into the Spider-Verse is winningly self-aware in that after Miles discovers his newfound powers, he flips through a Spidey comic book for pointers. It’s not long before he tracks down that pesky spider and Spider-Man (Chris Pine, Outlaw King) himself.

But before Spidey can advise the teen, Kingpin (Liev Schreiber, Ray Donovan) interferes. The spider escaped from a secret lab where the crime boss’s crew is opening portals to other dimensions. Can Miles help the others get home and stop the Kingpin from unbalancing reality?

Miles isn’t reluctant to do what’s right, just doubtful that he can—and that he’s worthy of his abilities. He finds an unlikely mentor in Peter B. Parker (Jake Johnson, New Girl and Jurassic World), an unkempt thirtysomething Spider-Man in an existential crisis. This web head has been on the job for 22 years, gotten divorced, and gained a few pounds.

The voice cast, including Lily Tomlin and Kathryn Hahn, is spot-on. Hailee Steinfeld (Pitch Perfect 2 and this month’s Bumblebee) voices Gwen Stacy, killed in Peter’s original storyline but alive in another universe as Spider-Gwen, a drummer who hides her crime-fighting from her police chief dad. Nicolas Cage (Mandy) channels the angst and antiquated slang of Spider-Man Noir, depicted solely in black and white. Kimiko Glenn (BoJack Horseman) provides the cheerfulness of Peni Parker, an anime-style middle-schooler who pilots a spiderlike mech suit. Comedian John Mulaney, known for his dry, mannered delivery, voices Spider-Ham, whose weapons include an oversize mallet.

Artists and animators Bob Persichetti (The Little Prince) and Peter Ramsey (A Wrinkle in Time), as well as writer/producer Rodney Rothman (22 Jump Street), balance tense action sequences with nimble humor and some touching emotional moments. The script by Phil Lord (The Lego Movie) sometimes leans too jokey, but it finds genuine laughs as well as heart when the story needs it. The animation team does spectacular work, from the affectionate comic book nostalgia to the thrills of swinging around skyscrapers, portal glitches, and tiny character details: Miles’s untied shoelaces, Peter B. Parker’s grubby fingers, Gwen’s expressive eyebrows and sardonic smile.

Marvel Comics legend Stan Lee appears in a poignant cameo recorded before his death earlier this year. In a note at the end, the film also honors both him and Steve Ditko, a Marvel artist and writer, as Spidey’s creators.

Spider-Man: Into the Spider-Verse proves a fitting tribute for both while depicting Spidey’s enduring appeal. By expanding the possibilities of spider-heroes, it engagingly shows how heroics hinge most on a person’s character. 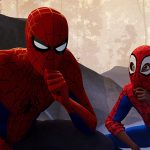 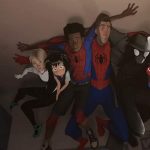 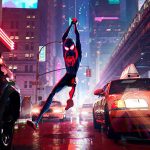