Hold My Screwdriver.
Buy It From Amazon
Buy It On DVD
Buy It On Blu-Ray

Snatched is only able to ride the chemistry of its leads so far. The back-and-forth between Amy Schumer’s self-absorbed slacker and Goldie Hawn as her suburban recluse mother is wonderful in the film’s first act. Then the plot kicks in. Abducted and thrown into the wilds of Ecuador and Columbia (as played by Hawaii), the delightful duo is left wandering, the search for punchlines as laborious as the quest for rescue.

Emily (Schumer) is fired from her retail job and dumped by her boyfriend (Randall Park, very funny in his one scene) just before the couple’s nonrefundable trip to Ecuador. The aimless lush retreats to the home of mother Linda (Hawn), whom she invites on the South American getaway. Once at the resort, overprotective Linda slathers on the sunscreen and grows wary of smooth-talking traveler James (Tom Bateman). Emily, however, is smitten. While on a day trip with the Englishman, the mother and daughter are kidnapped for ransom by generic bad guy Morgado (Oscar Jaenada).

The screenplay by Katie Dippold works in fits and starts, and, much like her previous efforts The Heat and Ghostbusters, achieves the most laughs through quirky asides and riffs from talented performers. Story machinations too often stall the romp, and the strains of getting mom and daughter from one wacky situation to the next grow tiresome.

Weak supporting characters are given a single thing to do, and while it may be funny once – like Christopher Meloni’s ineptitude as a jungle guide or Ike Barinholtz as the agoraphobic brother/son back home lovingly calling Linda “muh-ma” – their single dimension is quickly overplayed. For a (mercifully) 90-minute movie, the B-story involving Barinholtz and an unhelpful State Department employee (Bashir Salahuddin) takes up a lot of time and consists of a single joke told in slightly different ways with varying degrees of success. Wanda Sykes and Joan Cusack are entertaining, yet largely wasted, as handy plot devices. Cusack is literally silent in service of a joke that’s not all that amusing.

Director Jonathan Levine (50/50, Warm Bodies) has balanced comedy with incongruent genre requirements in the past, but here the edges of the adventure are smoothed by a series of forced gags. An extended bit involving a tapeworm comes out of (and goes) nowhere. More staged shocks, including a few sudden deaths, are more obnoxious than uproarious.

Mostly lost in the broadness – it’s 2017 and we’re still doing jokes about simplistic PIN numbers? – is the potential that exists in the interplay between Schumer and Hawn. The comedian is hilarious when she plays up her standup persona, posing for Instagram photos or reacting incredulously as her boyfriend breaks up with her. Not so much when shouting in the wilderness or taking pratfalls. In her first film role in 15 years, Hawn makes for an empathetic straight woman that’s relatable as she struggles with social media or shows affinity for her cats. After being snatched, the only comedic material she’s given are a t-shirt emblazoned with “¡HOLA!” and a porno mag.

The awkward shoehorning of lesson-learning and acceptance of each other, flaws and all, does nothing for the relationship, either. Snatched gets too caught up in the surrounding hijinks to make us care about finding the familial connection, or, more importantly, make us laugh during the journey. 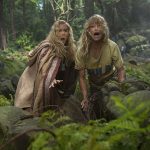 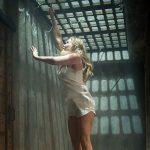 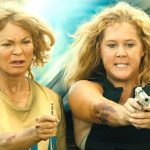 One thought on “Snatched”