Boo!
Buy It From Amazon
Buy It On DVD
Buy It On Blu-Ray

How do you prefer your Sinister? Do you like the notion of mysterious Super 8 films spilling snuff-like visions of death out over an intriguing and occasionally dark mystery, or would you rather see 88 minutes of that clown-faced demon soul sucker Bughuul bouncing around like Freddy Krueger with a need for attention. Well, the makers of this wholly unnecessary sequel have determined that all you want is more monster, so the entire reason the first film worked is tossed out the window in favor of that fiend popping up in more and more illogical ways.

This time around, it’s single mom Courtney Collins (Shannyn Sossamon) and her twin sons Dylan (Robert Sloan) and Zach (Dartanian Sloan) who come face to face with the fiend, with Deputy So and So (that is the character’s name, played by a returning James Ransone) from the first film trying to find a way to stop Bughuul’s reign of terror. This new family lives near a church which was the site of some nasty ritualistic murders, and the weaker of the two boys — Dylan — soon finds himself being visited by the fright flick version of the WWE’s Sting on a regular basis. Then bad things start to happen. Duh.

The whole selling point of the original Sinister were those unsettling Super 8 films. They’re back again, but rendered almost completely unbelievable in their complexity and illogic. In the first film, kids offed their families via hanging and drowning. This time around, we get leftovers from Saw. The characters are also less compelling. Ethan Hawke is a dandy everyman, capable of making us believe that dark and demonic things are going on under the surface of his surreal suburban real crime writer dilemma. Sossamon and Ransone offer none of his depth. They are just going through the motions with the audience experiencing the sickness that comes with such aesthetic whiplash.

But the biggest problem with Sinister 2 is tone. The original was all about creating an atmosphere of dread. Scares were allowed to build and linger, leaving the viewer shaken and unsettled. In the sequel, we return to jump scares and false starts, Bughuul going “Boo!” at random moments because Citadel director Ciaran Foy is all about the obvious. Nothing is implied or inferred. Instead, we can see certain plotpoints playing out scenes before they arrive, the idea of making ghostly kids creepy devolved into a laugh out loud Village of the Sort-of Damned dynamic.

Without going back to Scott Derrickson’s far superior film for comparison again, Sinister 2 fails outright, on its own. It’s a lame origin story, a badly executed family-in-peril film, and an equally weak supernatural mystery. There’s no internal drive, no fire or energy that leads us to its conclusions, and the frights executed are pathetic and repurposed from better horror. It’s a standard cash grab, a way to get the fans of the original into theaters and their money in the bank before they realize how ridiculous and dull it all is. Had the twin angle been examined more, as in the classic fright film from 1972, The Other, we may have forgiven the whole Bughuul-a-thon. Instead, the psychological is left out while the stupid is kept front and center.

Who knows — maybe you’ll like Sinister 2. Maybe you’ll enjoy its made-for-TV level fear factors and constant creative chaos. Maybe the lack of any real suspense or terror will be right up your middling sense of macabre. There are worse examples of the genre, but sadly, this Sinister is not the exception that defies the rule. That was the original film. This time around, it’s all about how mediocre things are, and how much cash the studio can suck from it — suck being the key word. 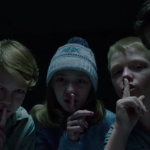 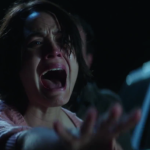 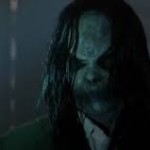