Sin City: A Dame to Kill For
By: Bill Gibron

Even driving is better in black and white.
Buy It From Amazon
Buy It On DVD
Buy It On Blu-Ray

Is two-thirds of a great Sin City sequel good enough? Is the absence of original cast members Clive Owen, Michael Clark Duncan, and Devon Aoki acceptable, considering their impact the first time around? Is nine years too long to revisit this neo-noir material, considering its groundbreaking “digital studio” style is no longer all that fresh? The answer, thankfully, is “Yes, Yes, and YES!” as Robert Rodriguez and Frank Miller once again churn out a meaty, machismo-laced potboiler so dark and desperate it literally leaps off the screen (especially in 3D). No, not everything works in Sin City: A Dame to Kill For and the novelty of the original film is long, long gone, but we still get the kind of classical guys and dolls dramatics that delivers on both the crime and the always-potent punishment.

Both a prequel and a follow-up, we first meet up with Marv (Mickey Rourke) as he wakes up from a car accident surrounded by bodies. He tries to piece together the event that led to this particular vehicular mess. In the meantime, stripper Nancy (Jessica Alba) is struggling with the loss of John Hartigan (Bruce Willis) and is finding solace in the bottle. Her growing insanity has her targeting Basin City bigwig Senator Roark (Powers Boothe) for assassination. The powerful politician is also dealing with the arrival of card sharp named Johnny (Joseph Gordon-Levitt) with luck on his side… and a secret. Finally, we go back in time, to a moment when Dwight McCarthy (now Josh Brolin) was dealing with his inner demons. When a former lover (Eva Green) comes along, looking to be saved from her abusive marriage, our lovelorn lethal weapon steps up.

If you dropped Alba’s otherwise ordinary story from this film, it would be a more than worthy follow-up to its famed 2005 predecessor. Everything you loved about that first foray into hard-drinking, hard-dying, voice-over violence is amplified here. There’s more bloodshed, more breasts, and more brutality. Indeed, for those who wondered if Rodriguez and Miller would tone down their post-modern take on the classic ’50s archetypes in order to fit our more PC propensities, the truth is in the titillation. In fact, Ms. Green spends more time naked than she does dressed, her obvious “assets” used to sway characters into doing her bidding.

There is also a lot less finesse here. Our directors don’t need to fiddle with an origin story or set up the various situations. Marv is still an inhuman machine who enjoys — nay, loves — to hurt people, while Dwight, even in a new, pre-plastic surgery guise, is still the thoughtful romantic tough. The dames are all arm candy curt or plot point lethal and the law still looks after those who can throw a bit of cash their way. In between all the posturing and vice, however, is a real expansion of the cinematic language. Thanks to their brilliant use of greenscreen and technology, Rodriguez and Miller create a living comic book, one that breathes, and bleeds like stylized real life.

Outside of the tinted monochrome, the filmmakers also show a real grasp of jaw-dropping action. When Dwight, Marv, Miho (Jamie Chung), and Gail (Rosario Dawson) storm Green’s well-armed mansion, the various slaughter set-pieces are stunning. Similarly, when Marv and Nancy do the same with Senator Rourke, there’s a real power in the practiced death. It’s just too bad we don’t get as invested in these stories as we did the first time around. The characters aren’t as important in Sin City: A Dame to Kill For. There’s much more splash here than substance.

And yet, that’s all right. Rodriguez and Miller aren’t out to make some big point about ’40s and ’50s B-pictures or the way in which human flaws can lead to social horrors. No, Sin City: A Dame to Kill For is supposed to supply gore and gratuity, and it does, in dizzying, delightful, digital buckets. 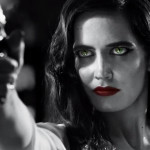 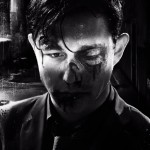 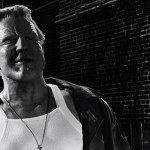