What has happened to our country? Where did it all go so very, very wrong?

A little over 50 years ago, people took to the streets to defend their inherent human rights while politicians played policy games in closed door backroom strategy sessions. Once both sides could see the bigger picture, there was compromise and advancement. Now, less than a lifetime later, we seem to be going backwards.

Case in point: The Voting Rights Act, the groundbreaking legislation at the center of the surprising contemporary-feeling movie Selma. In 1964, the Rev. Martin Luther King and his followers used non-violent protest to earn minorities the unencumbered ability to vote. In 2014, it looks like everything they achieved has been drained of its meaning.

The focus is very narrow in Ava DuVernay’s amazing motion picture. Instead of taking on Dr. King’s (a brilliant David Oyelowo) legacy, she concentrates on the famous march from Selma to the Alabama state capital at Montgomery. The “I Have a Dream” speech has already happened and Lyndon Johnson (an equally effective Tom Wilkinson) has gotten Congress to pass his all-important Civil Rights Act. Both sides want more. Johnson wants King’s help to wage war on poverty. King, on the other hand, wants clarification and enforcement of the Act’s provisions, including easier access to the ballot box for Southern blacks.

What’s stopping things? Well, local officials, empowered by pigheaded politicians like Alabama governor George Wallace (Tim Roth), are creating barriers and obstructions to voter registration, such as poll taxes, intelligence tests, and other such non-white oriented nonsense. King wants to rally the citizens of Selma, and with the help of other grassroots activists, they take to the streets.

This bothers Coretta Scott King (Carmen Ejogo). She fears for her husband’s safety. She also believes he has lost his way and is enamored of the attention given to her man by the powers that be. Eventually, the March happens, and the racist sheriff and his men proceed to beat the participants. After an important court case, King joins the rally, taking his message all the way to the Alabama capital steps.

Selma is an astonishing work. It’s insightful and important, entertaining without being preachy or predictable. Even those of us who grew up in the time and remember the history firsthand can learn something here. If all change is about sacrifice, then the events that played out in Selma cost everyone something significant. The loss to the participants is obvious. Too many broken and bloodied bodies. Too many dead. But King is also shown losing his “innocence,” becoming as much a tool for change as a manipulated pawn in a bigger political game. There’s a telling scene where Malcolm X (Nigel Thatch) shows up in Selma to offer his help as a “buffer.” “Let me be the one they all fear,” he tells Mrs. King, “So they will run to your husband as the one they can trust.”

Indeed, within all the indelible images of bigotry and fear (the film offers up one of the most devastating looks at the 4 Little Girls case you’ll ever witness), Selma stays centered on the people. Johnson and King have a great series of casual debates, each one proposing and then countering before coming to some conclusion, good or bad. Neither is inflammatory, but matter of fact. The President wants to do more for minorities. King’s argument is, give them all the tools possible and then maybe they can fend for themselves. The Voting Rights Act, the same Voting Rights Act that the 2014 Supreme Court just dismantled, was the crux of this coming together.

And when you factor in events like Ferguson, when you see how racially motivated most of the political discussion is today, it makes Selma all the more difficult to watch. Five decades ago, people paid with their lives for change in this country. Now, under the guise of such “progress,” we’re backsliding into bigotry, albeit in the name of “taking America back from the government.” Selma shows us where we were going. Watching it now, it’s depressing how far from that path we’ve strayed. 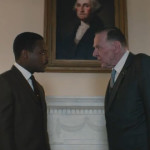 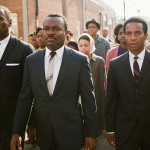 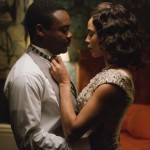 One thought on “Selma”