This isn't going to help you in rehab one bit.
Buy It From Amazon
Buy It On DVD
Buy It On Blu-Ray

A sense of humor is personal. It’s like taste in music, or one’s favorite movies. There can be no universal maxim, no “this is always funny” formula. There is, however, an easy way to indicate the exact opposite of hilarious — just call it Scary Movie. Here we are again, seven years after part IV with another awful installment to a series nobody truly cares about. It’s just another 75 quick mindless minutes of specious spoofing that couldn’t find a target if said mark walked up to it with a neon sign pointing out the potential and then walked them, step-by-step, through the gag.

This is a humorless, joyless mess, a montage of meaningless references lifted from the last few years of Tinseltown “terror” as well as the typical (Honey Boo Boo) and atypical (Black Swan?) cultural lynchpins. Of course, nothing is more shocking than the opening sequence which sees halting has-beens Charlie Sheen and Linsday Lohan playing bed buddies as an unseen entity, ala Paranormal Activity, makes their attempted sexcapades that much more mind-numbing. At least we get a nice Benny Hill shout out.

The plot, or what passes for one, sees the aforementioned duo done away with, leaving some children (or something that passes for their kids) on their own. Cut to Snoop Lion and his buddy Mac Miller wandering through a forest looking for a decidedly different kind of “foliage.” Suddenly, they see… a cabin in the woods. Cue endless moronic riffs on said concept. There, they discover the aforementioned brats, who are soon sent off to live with Sheen’s relatives, a primatologist (Simon Rex) and his ballerina wannabe wife (Ashley Tisdale, subbing for an MIA Anna Faris). Yes, there is a super-smart ape hanging around doing what crap-flinging chimps do best. Yes, it turns out the feral girls have a “supernatural” sitter like that in 2013’s Mama to make life “terrifying” for everyone involved. No, we still aren’t laughing.

Toss is a pool cleaner party (not with people, but with actual pool cleaners), more monkey dung dodge ball, and enough missed opportunities and DOA material to warrant an FBI investigation, and you have reason enough to dismiss Scary Movie V (or as the ads put it, Scary MoVie) outright. That the filmmakers, including the formerly funny David Zucker (of Airplane! as well as the lamentable An American Carol fame) and Pat Proft (we’ll hold off hating on director Malcolm D. Lee, for now), believe that something as slight as mocking Tyler Perry or criminal as dissing the entire Mexican race via a fat, hairy maid is clever smacks of personal and professional insanity. Heck, they even throw in a wildly out of place Fifty Shades of Grey parody because… well, because it’s one of those “nudge nudge, wink wink” references the audience will plotz over, amirite?

And that’s really the point here. It’s not to be funny. It’s not to be fresh or even topical. Something like Scary Movie 5 exists so that an already short attention-spanned demo can sit inside their local Cineplex, sip their oversized beverage, snack on their salty, oily popcorn, and poke each other in the ribs over the references they see. “Hey, that’s The Evil Dead.” “Wow, that’s just like Inception!” Back when the Wayans family was in charge of these fiascos, they at least went over the top with tasteless gags and gross-out humor. Now, the franchise has finally found itself fully enveloped in the whole “…Movie” idium (Date Movie, Epic Movie, Disaster Movie). Comedy shouldn’t be as painful as this. Scary Movie V is like a sharp stick in the eye. Actually, such an injury would be a welcome respite from this garbage. 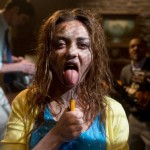 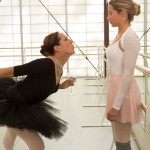 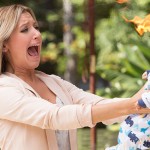 One thought on “Scary Movie V”