The new Anthony Weiner documentary is already out?
Buy It From Amazon
Buy It On DVD
Buy It On Blu-Ray

Playing as if it were conceived while watching Pixar movies through a cloud of bong smoke – and considering the filmmakers that’s a distinct possibility, Sausage Party mixes animated irreverence (read: lots of dick jokes and food-related sex puns) with underlying messages. The raunchiness is nervy, often inspired, and the commentary on things like theology and race relations is relevant and sincere. As sincere as it can be when delivered by a talking sausage with the voice of Seth Rogen.

The anthropomorphic foodstuffs at Shopwell’s grocery store begin each morning with a cheerful song (composed by Disney tunesmith Alan Menken). In it, they express a desire to be selected by their human “gods” and taken to The Great Beyond – the land of milk and honey, and every other food product, outside of the store where everything is perfect. And they can finally have sex.

Sausage Frank (voiced by Rogen) and his lady friend, the adjacently-packaged bun Brenda (Kristen Wiig), are excited when they’re placed in the same shopping cart, though a returned jar of honey mustard (Danny McBride) tells a horrible tale of what really happens to groceries outside of Shopwell’s. After a catastrophic cart accident that leaves Noodles’ innards hanging out and Peanut Butter’s wife Jelly dead, Frank and Brenda are left to wander the store in search of their aisle, and the truth. Meanwhile, Frank’s meek sausage pal Barry (Michael Cera) learns that the gods are indeed crazy and only use food for their own sustenance. His quest is to return to the grocery store and warn the others.

The trip through the store is like a journey through a connected, though segregated world where every aisle contains differing doctrines. Sammy the Bagel (Edward Norton, having fun doing a Woody Allen impression) and flatbread Lavash (David Krumholtz) argue over shelf space and spirituality. Lavash’s conviction that he will receive 77 bottles of extra virgin olive oil in his version of The Great Beyond is one of the many hilarious riffs on belief systems. There are a few too-juvenile (even for Rogen and crew), and mostly phonetic-based pun misses, including the German Sauerkraut hating “the Juice.” The major anchor is the antagonistic Douche (Nick Kroll), who shows up far too often to threaten our consumable heroes with annoying dude-bro speak.

Sausage Party is best when sticking to the quest aspects of the story and meaningful quips. You can laugh at the impish antics strictly for their surface-level cheekiness, or you can go deeper and admire the satire behind the madness. Who says that a sausage has to fit into a bun, and that a sultry lesbian taco (Salma Hayek) can’t be paired with Brenda? Just because us gods might frown upon it or find it unappetizing, why can’t these sentient beings decide for themselves?

A sage old bottle of Firewater (Bill Hader) and a box of Grits (Craig Robinson), who has a serious beef with Crackers, add some historical perspective. Their wisdom and viewpoints have gone largely ignored by a populace of conformist cuisine, justifying their existence by believing in a higher power. Whatever side you fall on in these eternal human arguments, there’s some truth to be taken from these provisions.

Occasionally mixing its message (can we call the casting of Hader and Krumholtz white-boxing?) and getting lost in a supermarket full of ready-made R-rated gags, Sausage Party is uncompromising with its philosophy and its vulgarity. Maybe we should just enjoy the juxtaposition of cartoon with crudeness, which also helps cement the ridiculousness of the human squabbles being satirized, and take the movie’s advice: enjoy the now on the road to enlightenment. Which, in regards to watching Sausage Party, is a pretty fun 90 minutes. 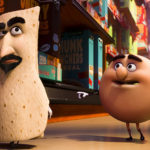 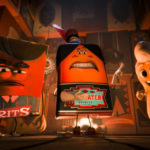 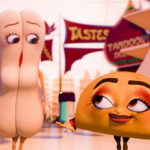