For pinks?
Buy It From Amazon
Buy It On DVD
Buy It On Blu-Ray

Ron Howard doesn’t make “classics.” He’s a journeyman with an artist’s ambitions. He owns an Oscar (and many more-deserving individuals don’t) and has shown a slick propensity to bounce from genre to genre, surviving numerous flops and failures along the way. Heck, he’s even the directorial voice of the ongoing, no-one-asked-for, Robert Langdon/Dan Brown franchise. Now, he seems to be trying to stretch his often limited aesthetic with the true life rivalry between Formula 1 racers James Hunt (Chris Hemsworth) and Niki Lauda (Inglourious Basterds’ Daniel Brühl). From 1973 through 1979, these two amazing drivers defined their sport, their divergent personalities illustrating both the cold, calculated precision as well as the ready-to-cheat-death swagger needed to pilot one of these 170 mph beasts.

Yet Howard turns Rush into what can best be described as “Dueling Assholes.” In fact, both characters frequently refer to each other by such a direct endearment throughout this otherwise decent film. It’s the early ’70s and egotistical Englishman Hunt is the hunky hothead of the Formula 3 circuit, bankrolled by British nobleman Alexander Hesketh (Christian McKay) and winning races via cockiness and a keen knowledge of the various tracks. When the Austrian Niki Lauda shows up, having more or less bought his way into the game, our blond himbo takes an instant disliking to him. Soon, they are adversaries, taunting each other before finally graduating to Formula 1. Niki ends up driving for Ferrari and showing them how to lighten their cars. Hunt, desperate to compete, takes a gig with McLaren. By 1975, Lauda is the World Champion with Hunt close behind. The events of 1976 will change both of their lives forever.

Building from the character up and never really touching on the intricacies of the sport, Rush reminds one of the time, back in the ’60s and ’70s, when actors like Steve McQueen and Paul Newman pushed their love of racecar culture to the very front of the film industry. While its tenure was short lived, we still have efforts like Grand Prix and Le Mans to remind us of what mediocre moviemaking is/was all about back then. Rush is a bit better, if only because the technology has caught up with a director’s ambitions. Howard hopes to show us, in brief iconic snippets, how these motors measure out their petrol power, music video-inspired montages of pistons and sparks giving us a mere glimpse of the complex mechanics involved. Similarly, the races fall into an equally superficial rhythm, the revving of engines followed by side by side positioning as Hunt and Lauda jockey for final position. Add in a crash or a possible problem and you’re done.

As our leads, Hemsworth and Bruhl are excellent, assaying their portraits of god (the former) and geek (the latter) with the kind of panache you’d expect from their real-life counterparts. While Hunt has all the hedonistic moments, Lauda wins us over with his persistence and his personal commitment. Sadly, neither has a love interest worth mentioning. Olivia Wilde walks in and walks out of Hunt’s life like the runway model she portrays, while Alexandra Maria Lara was clearly hired because she can look both comely and really concerned at the same time. And then there is the rest of the cast, circling our heroes with a clear knowledge that they are the third priority here, after the cars and the stars. Howard handles them well, but they are given little to do.

As an example of a purely modern take on an older action concept, Rush is reasonably entertaining. It travels by quickly and only swerves to avoid anything remotely resembling depth or detail. As racing films go, Ron Howard has crafted a winner. When you consider the other entries in that particular cinematic category, however, that’s not saying much. 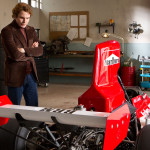 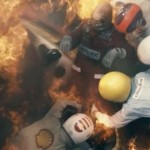 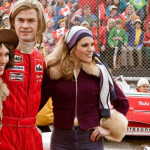