Hey! Come back! Get me outta here!
Buy It From Amazon
Buy It On DVD

Roberto Rossellini’s neo-realist masterwork, Rome Open City, was shot with shards of film in bona fide war-torn Rome locations in the winter of 1945 while the Germans held onto a chunk of Northern Italy, the Allies were in the South, and Soviet troops advanced into Italy from the west. Although some scenes were shot on studio sets, most of the locations were hyper-real, shot in the actual locations of the true events that make up Rome Open City. Nazi soldiers marching through deserted streets, bombed out buildings, crumbled sidewalks. The dust, debris and destruction are a tactile physical presence in the film… as is the film itself. Watching Rome Open City has always been like viewing an artifact of the bitter, soul-killing war, the prints of the film looking as if they were found on a scrapheap amid a collapsed building – scratched, washed out, tinny soundtrack, Neanderthal subtitles.

But now Rome Open City, thanks to the graces of Cineteca Nazionale-Foundazione Scuola Nazionale di Cinematografia, Coproduction Office and Istituto Luce Cinecittá, can be seen in a full digital restoration with retranslated subtitles. Although there are always issues with digital restorations, in this case the film has at last been removed from the museum display case and the power of the work can finally be fully appreciated.

As the granddaddy of all post-war Italian cinema, this waxwork of film studies classes heralded the films of De Sica, Visconti, Antonioni, Pasolini, and Fellini (one of the screenwriters on the film along with Sergio Amidel and Rossellini, who wrote it in Fellini’s kitchen). Very quickly Rome Open City (along with the other two films of what became known at Rossellini’s war trilogy – Paisan and Germany Year Zero) became a sacred text of neo-realism and a dead fish, especially when Rossellini himself began distancing himself from the film, feeling that it was too pat and manipulative for his ever-evolving tastes. But seeing the film in this restoration is seeing it anew with fresh eyes.

The film takes place in the winter of 1943 during a nine-month Nazi occupation of Rome. The taut story, which plays out like a compact and cutting version of the later French film Army of Shadows, concerns the flight of freedom fighter Giorgio Manfredi (Marcello Pagliero) as a small community of Roman citizens gather together to help Manfredi and Francesco (non-actor Francesco Grandjackquet), another resistance leader, escape from the Nazi-controlled “open city” to the Allies and freedom. This group of partisans include Francesco’s pregnant fiancé Pina (Anna Magnani, in the role which made her an international star) and milquetoast local priest Don Pietro (performed with a nicely comic, descending into heroic, turn by comedian Aldo Fabrizi).

The first half of the film plays like a comedy as the down-to-earth Italians subversively cheat, trick, and wisecrack the nefarious Germans. But the film takes a raw edged and shocking turn in the famous scene where Pina, running after Francesco on the day of their wedding, after the Gestapo has rounded up all the men in her apartment building and takes Francesco away on their truck, is surprisingly and startlingly gunned down with sudden swiftness by a German soldier. Magnani plays the scene to the hilt and you can actually feel Magnini’s earthy life force wisp away. The air is sucked out of the film and then the film takes a dark and sinister turn — a strangler’s hands on your windpipe. There is no going back from there.

Like all of Rossellini’s films, Rome Open City is about life and humanity and the difficulty of retaining either one in a cold, impassive world. This attitude is best summed up by Don Pietro as he faces execution by the Nazis, “It’s not difficult to die well; it’s difficult to live well.”

Today with all the tragic confrontations in the world — in Iraq, Syria, the Ukraine, Boko Haram, ISIS (and on and on and on) – the world needs the humanitarian examination of a Rossellini to apply a dose of art to the barren and hopeless landscape of contemporary reality. Sadly there is no Rossellini for today; no artists willing examine the horrors. All the more reason to experience Rome Open City. Seventy years after its initial release, it still hits like a sledgehammer to the soul. 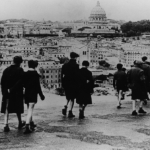 The boys head back to the open city.