Ride Along
By: Bill Gibron

Ride Along is relentless. It’s like a yapping lapdog sitting in the corner, barking incessantly and desperate for your attention. Though the leads are more than likeable, they can’t overcome a paint-by-numbers script and a PG-13 rating that literally yanks the teeth out of the comedy. Had it tried to be something different, had it walked the line between legitimate action film and hard R-rating realism, it might have been a winner. As it stands, audiences will line up for its set ’em up, knock ’em down approach while getting nothing more than a few faint belly laughs for their trouble.

Funnyman flavor of the moment Kevin Hart plays Ben, a goofball gamer who works as a high school security officer. He has dreams of serving in the Atlanta PD and has applied to attend the Academy. This makes his fiance Angela (Tika Sumpter) happy. She wants him to show some initiative in the hopes it will impress her hardnosed ATL detective brother James (Ice Cube). He hates Ben ever since an incident at a family cookout and he’s desperate to find a way to get him out of the picture once and for all.

The opportunity comes while James and his cop buddies Santiago (John Leguizamo) and Miggs (Bryan Callen) are investigating a stolen arms case involving Serbians and a mysterious mobster named Omar (Laurence Fishburne). Ben wants his future in-laws’ blessing on the upcoming wedding. James believes a day in the police cruiser will cure lover boy of his desire to be a policeman — and his desire to marry Angela. At first, it’s nothing but hazing and half-baked harassment. But as the Omar case heats up, it becomes clear that Ben can help James nab the bad guy — that is, if he doesn’t get them both killed first.

For the first 90 minutes or so, Ride Along is a trial. It’s all nonstop jibber-jabber and occasional, staid action set-pieces. One moment, Hart is running his mouth like a madman on meth, the next we are thrown into another of director Tim Story’s derivative stunt sequences. As an example of a buddy comedy, Ride Along only succeeds toward the end, when it’s thoroughly broken down your defenses and worn out your will to remain stonefaced. Then its persistence pays off, if minimally. Hart can be a hard humor pill to swallow. He’s like Robin Williams without the penis references. He never shuts up, ad-libbing constantly in order to find something funny in this grab bag of overdone genre cliches.

For Cube, the issue is more concerning. At one time, this rap legend was part of one of the most controversial and important groups — NWA — of all time. When he made the leap to the big screen, he carefully chose material that would match his badass persona. Now, he’s in family friendly mode, taking back every multi-syllabic curse word he ever used in order to keep things nice and MPAA-manageable. Had he taken the route of, say, something like 48 Hours, or grittier crime comedies, we may be able to forgive the folly. Instead, the scent of “sell out” is strong here, a once important hip-hop figure reduced to playing the straight man to 2014’s answer to big screen wit.

The rest of the cast is simply along for the ride (see what we did there?). You wonder if they will play a bigger part in the finale, only to have your worst, formulaic screenwriting fears realized. Story keeps things spry, but the undeniable aura of “been there, done that” drags everything down. By the time the post-credits stinger shows us more of the subpar slapstick that’s fueled some of the film’s humor, we realize we’ve been had. Ride Along promises a giddy good time. All it can muster is some mindless mediocrity. 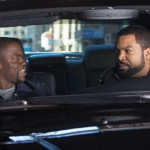 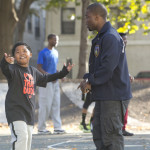 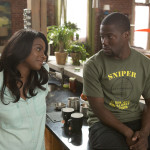 2 thoughts on “Ride Along”