I got my good eye on ya.
Buy It From Amazon
Buy It On DVD
Buy It On Blu-Ray

Riddick is the result of one thing — the success of the international box office juggernaut known as the Fast and Furious franchise. Previously DOA as far as Universal was concerned, the last two installments — Fast Five and Fast and Furious 6 — raked in $626 million and $787 million respectively, giving former action wannabe Vin Diesel a new lease on big screen legitimacy. Thus the balding brute has used his newfound clout to resurrect his favorite character, an alien (Furyan) warrior with the ability to see in the dark named Richard B. Riddick. First seen in the Dawid Twohy’s cult fave Pitch Black, the agile anti-hero returned for a less successful second outing (The Chronicles of Riddick) and a series of popular video games. Now, Diesel has deemed Riddick worthy of another stab at success. Too bad he and Twohy couldn’t resolve what kind of movie they wanted to make.

Riddick is basically two movies in one. The first, the shorter of the two, finds the character stranded on a desolate planet filled with all manner of unfriendly, lethal predators. Since Riddick is one as well, we get a series of stalk-and-slaughter scenarios meant to showcase how badass Diesel and his silver-eyed savant can be. Hoping to escape this extraterrestrial hell-hole, our lead lures a bunch of equally adept bounty hunters down to the planet’s surface (via an emergency beacon) with hopes he can hijack their ship and leave. Naturally, before doing that, he has to battle these well-armed individuals while we in the audience have to put up with tired character cliches, significant downtime between dust-ups, and some horribly arch performances.

Indeed, to his credit, Twohy has decided against broadening the mythology from 2004’s Chronicles of Riddick to keep things simple. This is really nothing more than a dressed-up slasher film with Diesel playing a marble-mouthed Jason Voorhees and the rest of the cast (including some clever CG creatures) playing the mandatory victim fodder. In that regard, Riddick sort of succeeds. Some of these mercenaries are so obnoxious and unlikeable that we can’t wait to see how our “killer” will deal with them, and for the most part, their deaths are cinematically satisfying (this is an “R” rated film, after all). But there is really nothing more to this movie. In fact, it’s safe to say that the resulting rise in Fast and Furious receipts has lead Diesel to believe in what some in Hollywood call “Grocery Lists” — to wit: an actor who believes people will show up to see anything he is in, including an adaptation of his weekly trip to Costco.

There is really no other point to this film other than watching Diesel play within Twohy’s carefully crafted set-pieces. The opening offers all the variety and interaction of a video game (See Riddick take on wild beasties, even taming one to become his animalistic BFF!) while the cat and mouse between the hunters and their prey makes for occasional, edge of your seat entertainment. But coming off a summer which saw spectacle lifted to a whole new multimillion dollar level of ludicrousness, the relatively simplistic pleasures of Riddick become rote. There is nothing really inventive or unusual about what happens to all involved. Sure, the landscape and pitfalls are “out of this world.” The manner in which the characters deal with them are old hat.

In fact, it’s safe to say that Twohy tried to make something solidly sci-fi the last time around, and was rejected for doing so. Instead, he merely mimics Pitch Black (on a larger scale) and hopes audiences won’t mind. Perhaps they won’t, considering Diesel’s newfound career fortunes. Still, as a standalone entry in the actor’s oeuvre, Riddick is merely routine. We’ve seen it all before, and frankly, don’t need to see it again. 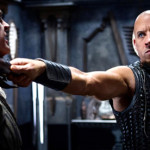 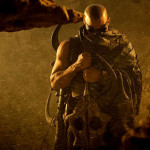 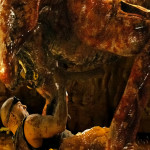