Fourth time's the charm?
Buy It From Amazon
Buy It On DVD

When you’ve made two of the best horror movies of the last decade (and, arguably, of all time) with your religious-tinged zombie movies [REC] and [REC] 2, you can’t fault fans for unrealistically high expectations when you announce another. After all, directors Paco Plaza and Jaume Balagueró not only managed to make the genre viable again, but they did so via an artistic approach — the first person POV found footage concept — that most critics have written off as a groan-inducing gimmick long ago.

Then came [REC] 3: Genesis (helmed by Plaza solo) and, with it, the collective outrage of the fanbase. Few found the wedding-based brouhaha worthy of the original installments, becoming a double edged sword for this, the supposedly final film in the franchise. On the one hand, there’s no real place for Balaguero (now handling Part 4 on his own) to go but up. Of course, his previous success with the first two films almost guarantees that anything outside of perfection will disappoint devotees.

Thankfully, [REC] 4: Apocalypse is more return to form than sad swan song. It brings back reporter Angela Vidal (Manuela Velasco) from the first two films, and offers a quasi-clever tie-in to the nasty nuptials of Part 3 (an old lady who slept through the events, played by Maria Alfonso Rosso) and a clever backdrop — an ocean liner retrofitted as a quarantine facility/laboratory — to amplify the angst. Yes, the narrative is flimsier this fourth time out, and Balaguero seems overly compelled to turn things comical, but anyone who loves this scary movie series will get their daily recommended requirement of dread here.

We get glimpses of why Angela is on board, followed by a bit about the wedding. Then we settle on the ship where army doctor Guzman (Paco Manzanedo) and lab leader Dr. Ricarte (Hector Colome) work to try to solve the mystery of this monstrous outbreak. Of course, as in any good fright flick, the medicos are messing with things they shouldn’t. One fried research monkey later (any more would ruin the scene) and our floating facility is infected. As Angela tries to find a means of escape, an IT nerd named Nick (Ismael Fritschi) steps up, offering a possible way of wiping out this plague once and for all. Maybe.

Indeed, while it claims to be the final film in the franchise, [REC] 4 feels more like a redirection. It dumps the found footage idea, abandons some if not all of the original movies’ demonic possession angle, and turns itself into an action-packed thriller with some obvious bows to 28 Days Later‘s blood and guts. The pace is relentless (after a rather dull bit of opening exposition) and the direction suffers from some shaky-cam antics. On the other hand, the tone and tension felt the first time out is back, as is the idea that somewhere in the bowels of this sea-going sanctuary, something awful awaits.

There are flaws here, however, missteps that go to the very fact that Balaguero and Plaza have milked this material for all it can offer. The “attacks” are repetitive, with the same undead faces in porthole jolts we saw just a few minutes ago. Then there is the aforementioned shaky-cam, which often renders the stakes between characters and creatures as pointless. It’s great to have Velasco back, but Angela’s arc has already been explored and expanded on. She should be more like Ripley from Aliens. Instead, she’s often a babbling bystander in her own storyline. Of the newbies, only Fritschi provides any real novelty. His Nick steps up even as the far more battle-ready members of the crew fall victim.

With other, non-[REC] successes on his resume (Fragile, Sleep Tight), Balaguero can safely send this gasping-for-relevance frightmare off into the history of the genre. [REC] 4: Apocalypse brings some bite back to the forlorn zombie’s status. It can’t match the original or its sequel, but it’s not a disaster either. 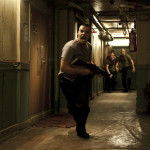 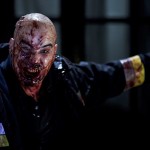 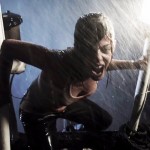