Now I only take cash for my work.
Buy It From Amazon
Buy It On DVD
Buy It On Blu-Ray

With an arbitrary title and a lazy everything else, Rage is as bland as a “gritty” thriller can be. Nicolas Cage mumbles and scowls his way through the muddled film that can’t decide whether it’s a straight-ahead revenge picture or a rumination on the cruel nature of violence begetting violence. Its conclusion suggests Rage wants to be the latter, but the staid shootouts, generic gangster-speak, and broad malaise make the intended gut punch feel like a capricious, almost absurd, contrivance.

Cage is Paul Maguire, a former criminal turned legit property developer with a laser-focus on keeping his 16-year-old daughter Caitlin (Aubrey Peeples) on the straight and narrow. He’s so protective that he makes sure the seedy bar that’s hosting her upcoming birthday party won’t deal meth while the teenagers are there. One night when Caitlin is hanging out with a couple friends, including admirer Mike (Max Fowler), disaster inevitably strikes. Mike and Detective St. John (Danny Glover) inform Paul that his daughter has been kidnapped by a band of masked intruders. Convinced the kidnapping is connected to his checkered past, Paul rallies vaguely thuggish associates Kane (Max Ryan) and Danny (Michael McGrady) to gather information by any means necessary. Revelations via gunshots and knife slashes ensue.

As the facts of the current situation are colored by events from Paul’s past, it becomes apparent there is a huge disconnect between the visions of  director Paco Cabezas and screenwriters Jim Agnew and Sean Keller. The scripters are aiming for a low rent Mystic River, with a character damaged by a violent past dealing with a tragic present the best way his fractured psyche will allow. Cabezas, on the other hand, is intent on following the Taken model of easily digestible melodrama punctuated bursts of action. The morose Maguire doesn’t mesh with the technically precise vigilante version, the dichotomy of the character leaving us with nothing to grab on to. Cage’s going-through-the-motions performance doesn’t help, either. Grim twists and turns in the case are lost as Maguire and his cronies crash a high-stakes card game and bust up a drug house. Their motivation evaporates in the chaos, made worse by the fact their reasons for appearing in these places is never quite clear.

Loose connections to the Irish Mob, headed by Francis (Peter Stormare, who hits his customary one note), and the Russian Mob, led by Chernov (Pasha D. Lychnikoff), are teased and strung along, but their respective clans never neatly dovetail into the narrative. Consistent with the film as a whole, the heavies are dull, defined by being in a wheelchair (Francis) and having a huge back tattoo of the Kremlin (Chernov). Also there are the thick – and, in one case, horrible – accents. Glover’s Detective St. John wanders in and out of the shady proceedings, repeatedly pleading with Paul to “let him do his job.” At least that’s what I think he says – his voice is so gravelly it’s barely intelligible and suggests he’s way beyond being too old for this shit. As the grieving wife/stepmom, Rachel Nichols exists to add a semblance of emotion, usually teary-eyed and reminding Paul that she loves Caitlin even though she’s only her stepdaughter. How sweet.

None of the individual elements are given the depth they need to add any significance to Paul’s crazed quest for justice. When late reveals render the imprudent hero, cardboard cops, dry antagonists, and the innocents trapped in the middle even more purposeless, there’s no eloquent statement on the ills of illicit brutality. It’s just brutal filmmaking.

The DVD/Blu-ray includes a making-of featurette, deleted scenes, and an alternate ending. No it was not all a dream. 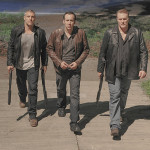 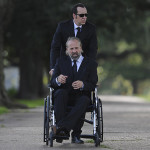 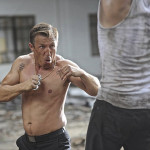