How many fingers am I holding up behind my back?
Buy It From Amazon
Buy It On DVD
Buy It On Blu-Ray

In Predestination, Ethan Hawke plays a “temporal agent” who travels back in time to prevent crimes before they occur. If you go into the movie with preconceived notions based on that vague logline, you’re probably going to be surprised at what the movie is actually about and how it’s about it.

Beyond some basic constructs, this is not Minority Report, or Source Code, or Looper, all of which melded their sci-fi moralism with conventional action-thriller beats. Predestination remains spiritually faithful to its source material — the short story “All You Zombies” by Robert A. Heinlein — focusing more on the nuts and bolts paradoxes of time loops and the extremely personal journey of the protagonist. While this is initially an interesting and welcomed approach from screenwriters/directors the Spierig brothers, the talky, pensive storytelling shows the strain of expanding a short story to feature length and also telegraphs the film’s revelations.

The sole action scene is used as setup. Our time-hopping crime fighter is horribly burned in an attempt to stop “The Fizzle Bomber” – a terrorist whose most devastating attack will kill thousands of New Yorkers in 1975. After extensive facial reconstruction, the agent (Hawke) is sent back to continue his mission, which involves posing as a bartender. He chats up a mysterious, sullen stranger who recounts the story of a girl, Jane, who was left on the doorstep of an orphanage as an infant in 1945. Teenage Jane (Sarah Snook) is selected to train in a government space program, only to be rejected for unexplained reasons. She then has a tryst with an older man. And then it gets weird.

Needless to say, Predestination wouldn’t spend the first half of its runtime recounting the story of Jane if it weren’t in some way connected with Hawke’s duties; to reveal anything else would venture into heavy spoiler territory. Though it’s best to go into the film cold, it starts to spoil itself from the opening frames, foreshadowing events that don’t require it and dropping bread crumbs along a pretty straightforward path. It’s a totally weird path, but one that’s easy to mentally traverse despite the strangeness. We don’t need the name of the bar, jukebox selections, jokes about the chicken and the egg, or comments about a snake eating its own tail to guide us.

Hawke and Snook excel in what is essentially a two-handed play for a large portion of the first and second acts; Snook is especially effective in a tricky role that requires her to ground an extreme artifice. She’s tough and vulnerable and helps us empathize with her existential crisis. Ultimately though, characters never really break free of being cogs in the plot machine, they’re only there to serve their purpose in the merry-go-round.

While the script has characters over-explain its themes, the Spierig brothers’ minimalist approach to the time travel device and different eras is accessible in its sharp simplicity. Visions of the ’40s and ’70s aren’t over-produced, while the ’60s Space Age corporation looks like a live action Jetsons. It all feels real. The violin case with combination locks that serves as the time machine is thankfully left superficial; the last thing we need is a headache-inducing explanation on how this thingamajig works.

Technical polish aside, Predestination is essentially a bloated anecdote. To its credit there aren’t glaring holes to dissect in the decade-hopping story, but there also aren’t revelatory observations. Regardless of the order we see things in, one thing leads to the next, leads to the next, and so on; and however fantastic the circumstances on this journey of self-discovery (and self-preservation) are, we’re always a step ahead. I guess that explains the title. 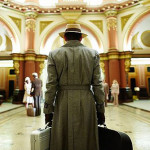 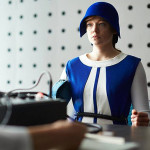