Let's move to Sparta.
Buy It From Amazon
Buy It On DVD
Buy It On Blu-Ray

Ah… Pompeii. What choice cheese you are. Neither gouda nor cheddar, Edam nor Danish Blue, but cheese none the less. Perhaps, it would be better to call you Velveeta, a slippery, silly imitation of the real thing — or even better, a purely processed cheese-food slice, nondescript in both flavor and appearance. Under the always-awkward directing designs of Paul W. S. Anderson, this dumbed-down disaster pic is like that little cup of questionable by-product served with a side of concession stand nachos. It’s easy going down, but barely resembles the item — in this case, a legitimate thriller — it’s supposed to mimic. But it sure seems like cheese.

Our story begins in upper Britannia. A tribe of Celtic horsemen and women are attacked by a Roman Legion lead by future Senator Corvis (Kiefer Sutherland) and butchered. Witnessing it all is young Milo (eventually, Kit Harrington) who is soon sold into slavery. He becomes a mighty gladiator and catches the eye of a visiting nobleman from Pompeii. He is then immediately sent to the resort town to fight in their arena. Upon arrival, he runs into trouble. Within his profession, he is destined to die by the hand of local champion Atticus (Adewale Akinnuoye-Agbaje). Personally, he falls hard for Cassia (Emily Browning), the daughter of Pompeii’s most privileged couple (Jared Harris, Carrie-Anne Moss). Naturally, Milo gets a chance to avenge his people, but not before all hell breaks loose, Mother Nature style.

If you can sit through the 70 minutes of twaddle it takes to get to the 3D good stuff, Pompeii will be a pleasant enough experience. Kowtowing directly to the international box office that will guarantee him at least a few more Resident Evil sequels, Anderson amps up the mayhem and more or less dumps the dreary soap operatics that mar his manufactured epic. Indeed, the main story is one we’ve seen a hundred times: a fallen family leading one lone survivor to seek out and avenge the impossibly accessible person who did the killing while, in the background, forbidden love blooms. Add in a few sequences of sweaty muscled fisticuffs and ample swordplay, and you’ve got something ready made to play in both Mumbai and Main Street, USA (emphasis on the former).

In fact, we really don’t need Sutherland’s scenery chewing, Browning’s hurt babe routine, or Harrington’s buff blandness. If Anderson had found a way, ala Roland Emmerich and his brilliant 2012, to simply set up some characters and pile on the chaos, we’d be more than pleased. That’s what we come to these films for. We want to experience a CG simulation of what the eruption of Mt. Vesuvius would have looked like (and more importantly, it’s impact on the population of Pompeii). But because someone insisted on both love and back story, we are stuck in mindless melodrama when all we want is more missile like fireballs taking out parts of the cityscape.

The special effects are indeed impressive, if often lost in the desire by Pompeii‘s cinematographer, Glen MacPherson, to bathe everything in the dim darkness of a volcanic ash cloud. This is especially true of a sequence where Cassia’s cliffside villa begins to crumble into the sea. We want to witness how this architectural wonder disintegrates under the force of Vesuvius, but most of the time, all we see is vague impressions of destruction. Toward the end, before a huge fire cloud turns everything into Hamlet, the true fakeness of the film’s settings becomes painfully obvious.

Sure, there’s a moment or two of unearned emotion and a Saturday afternoon matinee feeling to most of what Anderson puts out there. This doesn’t mean Pompeii is good. Instead, it’s a collection of Kraft Singles struggling to convince you that it’s a soufflé. It’s cheese, just not high-end film fromage. 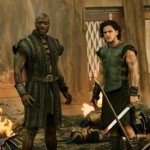 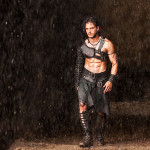 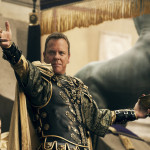