Where there's smoke... there's a merchandising deal.
Buy It From Amazon
Buy It On DVD
Buy It On Blu-Ray

When it arrived in theaters last year, Planes was seen as nothing more than a pathetic attempt by the House of Mouse to trade on the popularity of Pixar’s improbable merchandising monster Cars. The anthropomorphic vehicle franchise remains Disney’s most profitable toy line, so it made sense to move the action from the ground to the sky and, in the process, provide already haggard parents with even more action figure excuses to empty out their wallets.

Now the studio is back with the intriguingly titled Planes: Fire and Rescue, promising more of the same midrange animation entertainment. Oddly, that’s not the case here. Indeed, this is a far cry better, dumping the multicultural crudeness of the original to offer a simplistic but age-appropriate take on duty and heroism.

After racing legend Dusty Crophopper (Dane Cook) is sidelined with a bad gearbox, the one-time champion needs a new direction in life. When the airport in his hometown is closed due to safety violations, our hero decides to take up training as a SEAT, or Single Engine Air Tanker, an aircraft that drops water and fire retardant on forest fires. He heads to a school overseen by former TV star turned rescue helicopter Blade Ranger (Ed Harris), where he gets to know the rest of the crew, including Lil’ Dipper (Julie Bowen), Windlifter (Wes Studi), and Cabbie (Dale Dye).

When the VIP-attended re-opening of Piston Peak National Park’s famed resort The Grand Fusel Lodge (get it?) is threatened by a raging inferno, our novice has to step up and learn teamwork, perseverance, and perhaps most importantly, when to break the rules to save the day.

When you consider how horrid Planes was, the fact that this sequel is infinity times better may seem like faint praise indeed. However, Planes: Fire and Rescue wisely avoids the multiple pitfalls placed in its way (read: ethnically questionable international aircraft) to tell a simple matinee action tale. Indeed, the previous narrative, including many of the characters, are immediately cast aside so that Dusty can go to safety school and help save the day.

Within his new pals are efforts both potent (Harris, Dye) and passable (a little of Ms. Bowen’s lovestruck airplane goes a very long way indeed), all leading to a finale which shows off Disney’s penchant for sweeping vistas and animated glory. The massive raging fire is like a character unto itself, realistic without being scary, intense without causing too much under-10 concern. Kids will dig the thrills while adults will enjoy the fact that the film doesn’t talk down to its ankle biter audience. There’s even a clever homage to a certain ’80s “highway patrol oriented” TV series, including a cameo from its most recognizable star.

None of this can wipe away the aura of product placement though, each new vehicle another mandatory purchase come Walmart time. Even when it’s working as a film, Planes: Fire and Rescue can’t stop feeling like an 82-minute commercial. It just doesn’t have the depth we’ve come to expect, especially from a studio that’s managed to bank billions of dollars in profit. Disney has mastered the art of making money, even with something as subpar as the first Planes. Here, the notion of cross promotion and franchising replaces basics like character and plotting.

Still, Planes: Fire and Rescue argues that there might be something more to this material than merely feeding the need for family film fare. It will never rate as highly as other House of Mouse offerings, but as long as they learn from the massive mistakes made the first time around, this could be a pleasant placeholder between more significant studio entries. 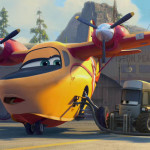 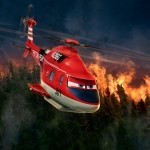 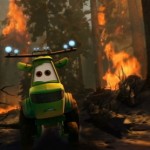