Nom nom nom.
Buy It From Amazon
Buy It On DVD
Buy It On Blu-Ray

Pixels is about as entertaining as a video game-based action comedy produced by and starring Adam Sandler can be. That is to say, working from a screenplay that is stunted by its own immaturity, within a filmmaking environment that can only generate a certain amount of visual imagination, the film is able to muster as much goofy summer entertainment as those trappings are willing to concede.

I know, I know – send in the Faint Praise Police. It’s true, though – while this is a far cry from Grown Ups or Jack and Jill or That’s My Boy, it is cut from the same cloth, with Sandler’s seemingly unshakeable tendency to pander to the lowest common denominator dragging down what is otherwise an amusing little fantasy. These Sandler starring vehicles play like a broken record – awkward plotting, character typing, casual sexism, and comedy that sputters in mini-skits inside the larger narrative. Luckily for Sandler – and mercifully for the audience – it so happens that Pixels is able to survive those typical rough patches based on the charm of its concept and the willingness of its cast to dive into its particularly abject brand of ridiculousness headfirst.

Maybe I’m just nostalgic for a premise such as this, wherein alien invaders have misinterpreted arcade mod transmissions from classic 1982 machines as a declaration of intergalactic war, and commence attacks on earth in the form of classic video games. It’s a fun variation on the typical summer disaster movie, except instead of all our national landmarks being obliterated by guns and lasers, they are pixelated by the likes of Centipede and Galaga. The concept could either be a breeding ground for giddy invention or aimless parody, and thankfully Pixels avoids the latter and retains enough breezy ingenuity to deliver a solid entertainment.

The attack puts the White House on high alert, but the president (Kevin James) bypasses traditional lines of defense and reaches out to his childhood buddy Sam Brenner (Sandler), who was a video game champion as a kid, to “read the patterns” of the villainous arcade attacks and therefore find a way to defeat them. If you can’t ignore the (admittedly many) questionable scenarios described in the previous sentence, perhaps Pixels is not a movie you will be able to tolerate. Invading arcade games is one thing, but the ideas of James as POTUS and Sandler as a video game champ damn near snap our traditional suspension of disbelief.

To its credit, the film never winks at the notion of James as president or Sandler driving through the White House gates and strolling into the Situation Room. It’s all just part of this willfully ridiculous farce, in which Brenner tags his basement-dwelling, conspiracy theorist buddy (Josh Gad) and his former opponent (Peter Dinklage) as cohorts in toppling the 8-bit extra-terrestrials and saving the world. Michelle Monaghan is the film’s token female, a military weapons specialist who introduces the guys to various creative weaponry. She’s the subject of Sandler’s frequent mocking — and of course becomes his love interest.

This screenplay is written by longtime Sandler buddies Tim Herlihy and Timothy Dowling, who struggle to move beyond a comedic tone that consists of anything other than cheap insults and awkward standalone gags. But thankfully, the lowbrow material is occasionally tempered, perhaps because everyone was aware they were making an expensive high-concept movie and not Mr. Deeds 2. It’s also helpful that the film is directed by an actual director, Chris Columbus, and not one of Sandler’s cronies. It’s not even as though Columbus is a visual virtuoso on the level of, say, Edgar Wright (Scott Pilgrim vs. The World was a bad movie to watch just before this one), but he at least has enough experience to create something resembling a movie. And in the case of Pixels, he’s created a relatively fun one, with creative VFX based on classic arcade games and actors like Dinklage (with a mullet and affected speech patterns) and Gad (who shrieks, sings, and stomps about as the film demands) going full throttle and sharing MVP honors for their trouble. It’s silly and ever imperfect, but it’s basically a ‘80s retro store turned into an event movie, and that’s okay with me. 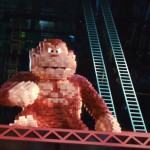 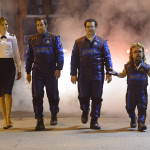 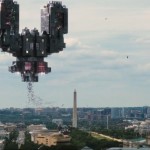