Person to Person
By: Josh Bell

Hipsters on the move.
Buy It From Amazon
Buy It On DVD

With its separate alternating stories, Dustin Guy Defa’s Person to Person at first seems like it might be the hipster version of intersecting-narrative dramas like Crash or Babel, but Defa isn’t interested in drawing pseudo-mind-blowing connections among the movie’s various threads. Instead he just plays each one out casually, like a stoner telling a rambling but somehow completely endearing story that’s entertaining despite never actually coming to a point. Some characters who at first appear to be starring in separate stories eventually come together, but others never meet at all, and even the small details that could connect the different elements of the movie are mostly left in the background.

The cast is a mix of recognizable indie stars (including Michael Cera, Philip Baker Hall, Tavi Gevinson and Broad City’s Abbi Jacobson) and newcomers, most notably Bene Coopersmith, who starred in Defa’s previous short-film version of Person to Person and is improbably charming as a rumpled jazz aficionado on a crusade to track down the person who attempted to sell him a counterfeit version of a rare record. Bene (the character named after the actor) asks nearly everyone he encounters about what they think of the new shirt that he’s wearing, and the weird combination of self-deprecation and bravado in this nerdy-looking middle-aged guy encapsulates the movie’s oddball appeal.

Bene’s quest is only one part of the story that meanders around New York City over the course of a single day. Jacobson plays a shy crime reporter in her first day on the job, traveling around town with her awkward, inappropriate editor (Cera), who is trying to show her the ropes as they follow the story of a housewife (Michaela Watkins) suspected of murdering her husband. Defa doesn’t have a strong understanding of how journalism works, but the dynamic between Jacobson’s Claire and Cera’s Phil, who’s attracted to her in a highly inappropriate way, is funny and honest. Whatever he gets wrong about being a reporter, Defa gets very, very right about being a nerdy dude who is way too into heavy metal.

Elsewhere, Hall plays an unassuming watch-shop owner caught up in the murder investigation, Gevinson plays a high school misanthrope annoyed but intrigued by her best friend’s attempt to set her up with a boy, and George Sample III plays a friend of Bene’s trying to atone for violating his ex-girlfriend’s privacy. That last storyline comes closest to tackling a serious and heavy subject, but Sample is such a laid-back presence, and his character is so contrite for his one cowardly, ill-advised act, that even some potentially distasteful material ends up good-natured and pleasant. Hall brings quiet dignity to his relatively small role, and the always delightful Gevinson projects intelligence and maturity in a part that could have ended up as a teenage cliché.

Defa shot the movie on 16mm film, which gives it a warm, nostalgic feel, even though the movie more or less takes place in the present. Defa is clearly influenced by the literate wittiness of NYC auteurs like Woody Allen, Noah Baumbach and Alex Ross Perry, but his movie has its own quirky rhythms, with a sense of humor that is gentler and less caustic than those other filmmakers. It’s an engaging and easily likable movie, as affable and eager as Bene in his quest for approval of his new attire. 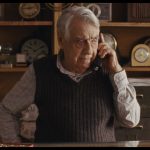 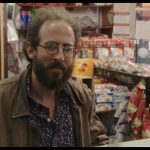 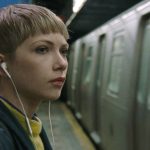 One thought on “Person to Person”